We spent this past week and weekend in Brussels, but that didn’t mean it was any less busy or fun! We enjoyed some new restaurants, moving into our new apartment, and a new bike route for me!

Actually, I have to kick things off with another funny story of me trying to fit in but making a fool of myself… Dan and I tried a new restaurant this week, where the food was delicious and the price was very reasonable (we’ve found that’s hard to come by in Brussels so far). I saw that hot mint tea was on the menu and was hoping that it was similar to what I had tried and loved in Morocco while studying abroad in 2011 so I decided to give it a try instead of the house red (wine), my usual go-to.

The waiter brought the tea out fairly quickly in what looked like the lamp from Aladdin, set it on our table, said some things to me in French, and then walked away. I had nodded my head at him thinking I understood what he said- that the tea was brewing so I should wait to pour it. I thought the lamp contraption looked odd to be holding tea but decided to just go with it. When I figured I had waited long enough for the tea to brew, I started pouring the liquid from the top… only it didn’t come out very fast and looked very light in color, unlike the tea I was expecting. I sampled a little and almost gagged… it was bitter and overpowering! I made an ugly face and Dan looked at me like I was crazy. I explained that this was not like the tea I remembered so I must have mis-read the menu. Even just a little drink felt like I was cleansing my palate AND my digestive tract- it was super concentrated. I decided I was going to muscle thru it and made an effort to take some sips every now and then, even refilling my glass once… until 10 minutes later when the waiter walked over again, this time holding the tea pot, and looked at the liquid in my glass. He gave me a shocked look and gestured toward the lamp indicating no, no, no that was very wrong. He immediately took my glass, dumped it in the sink, and cleaned it. He poured the tea at the table for me this time, and with the lamp, sprinkled just a little bit of the liquid (that I had been drinking straight) on top of my tea, garnishing it, this time making sure that I was paying attention. That made a lot more sense. The French instructions he initially gave did not… oh well my embarrassment makes a good story now.

We did get one thing right this week- we moved into our permanent apartment and are absolutely in love with the place! It’s in Ixelles near two parks- one small and one huge (the park is actually connected to a forest), and lots of great restaurants. The apartment can best be described as a mix of modern and charm with 2 bedrooms and beautiful wrap-around windows that let in this awesome, albeit probably temporary, Belgian sun. We moved in on Friday after work and so far our first two meals in the apartment were take-out- Hector’s fried Chicken and Ancho Mexican, actually the burritos and tacos were delivered via Deliveroo. We’ve moved our stuff in that we took with us on our flight, and our shipped goods arrive this week, so we are super excited to finally feel at home and settled in.

On Saturday night, we met friends out for drinks and a classic Belgian meal of mussels, fries, and beer. Belgium actually celebrated their Independence Day, referred to as Belgian National Day, this weekend and we learned that Independence Day here is celebrated differently than perhaps what we are used to in the US… much less flag paraphernalia and fireworks/sparklers. However, we did witness a military parade and Air Force fly-over- that looked more familiar. The people of Brussels, locals and ex-pats alike, were out and about in the center of the city to partake in plenty of eating and drinking, which we were happy to join in on. We actually attended a special culinary event- Resto National, where we purchased tickets and sat on picnic tables in a large square enjoying our mussels with other Belgians. The food was served cafeteria style, which is good when you’re carrying a pot of mussels, your fries, dipping sauce and beer! During our meal we were even treated to a mini parade (see picture below). Quite the appropriate way to celebrate the National Holiday in my opinion as someone who really enjoys mussels and fries. It was another beautiful summer evening in Brussels and we enjoyed some beer stops and the good company before heading home.

A Resto National Day parade led by the chef!

Our Sunday was low-key and included a visit to the local ice cream truck, which we’ve learned makes frequent drives past the park on the weekends. When we heard the familiar tunes, Dan was very “encouraging” of me running down to buy us ice cream- something like “it’s a new experience to try”… his sweet tooth is worse than mine! Afterwards Dan went for a run in the new neighborhood and I got out for my first bike ride in Brussels, which I was very excited about since I shipped my bike over and had it assembled a few weeks ago. I had been waiting patiently to take my bike out until we moved to our new place, since we now live so close to the park and therefore I can avoid busy streets. I’m very glad I waited as today I was educated on what happens when you ride your bike over the tram tracks at the wrong angle. My bike tire got stuck in the track as I was attempting to make a left turn at an intersection. Somehow, I managed to stay mostly upright, steer out of the track, and avoid the cars ahead of me and tram coming behind me, all while still clipped into my pedals, but that was a less than ideal start to the ride. Fortunately, I was able to put that behind me pretty quickly as I entered the forest and was on my way south of Brussels. I know I haven’t found the best route yet, but it was a great start to my hopefully many rides in this beautiful country.

The paparazzi even caught me buying the ice cream 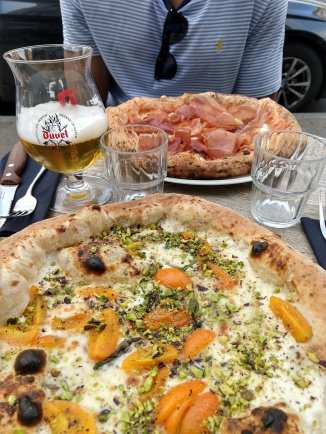 Sunday night pizza at the café across the street

Our German road trip is up next and I hear they don’t speak French or Dutch… more memorable tourist stories to come I’m sure.