A Change in Plans

It was a week in flux in Brussels as we woke up to new information about the coronavirus every day. The news seems to change hourly and it’s hard not to get sucked in and fixate on the increase in cases or new measures enacted that aim to contain a more widespread outbreak of the coronavirus. We cancelled our original plans to visit Copenhagen this weekend and then cancelled our secondary plans of a road trip to Ypres and the Flanders Fields of Belgium when the government mandated the closing of nonessential businesses. Our two upcoming trips to Prague for a half marathon at the end of March, and to Budapest for Easter during the second weekend of April, have already been called off as the airlines cancelled our flights.

I’m disappointed about our cancelled trips of course but have come to understand the implications of inaction and dismissal. It’s difficult to watch the number of new coronavirus cases and deaths grow exponentially in places like Italy and Spain. Thankfully new cases in China have slowed considerably. I will be the first to admit that I was in denial about how wide reaching this virus would be, but have since come to realize the need for personal responsibility – social distancing and separation makes a difference. We should think of it as our responsibility to protect those most vulnerable and use common sense to give healthcare workers the time to react and provide appropriate care to those who need it.

The new measures implemented in Belgium this week mandate that public places such as restaurants, bars, cafes and nightclubs close as of this past Friday, March 13th at midnight through until April 3rd, and schools in Belgium will be closed for as long as five weeks starting this Monday. Supermarkets and pharmacies will remain open during normal business hours and other shops will be required to close only on weekends. Dan will be working from home for the foreseeable future as well. The new measures mandating the closing of nonessential businesses are aimed at deterring people from congregating in groups.

I went to the grocery store on Friday morning, the day after the changes were announced and knew I wouldn’t be the only trying to get ahead of the chaos. I arrived 30 minutes after they opened to find that the meat department was sparse (rabbit was still available), there was not a single banana (they did restock those before I left), and the store had three bottles of hand soap left. I didn’t bother looking at the toilet paper aisle (but did see a few people with rolls in the checkout line) and I had already given up on finding hand sanitizer (that was in short supply before the pandemic).

There was still uncertainty about the impact of the new measures in Belgium on Friday, and I was personally feeling a little down. I enjoy cooking and baking but frankly, the thought of us doing that for every meal for the next three plus weeks was daunting. I learned that my gym would be closed until April 3rd – which makes sense – and was dismayed because I know the positive impact that exercise has both physically and mentally. These are of course relatively minor changes when considering the bigger picture, and I know that I am in a position of privilege to have the option of eating out and a gym membership in the first place. My point is, I realized that I was being forced to make changes and these changes were going to lead to some discomfort – I could choose how to respond. I wondered how Brussels would respond too.

Within the first 24 hours, I was heartened by the adaptations I saw.  As I write this, I’m looking out the window at our favorite Italian restaurant and am heartened to see them posting signs indicating that while they are closed for service in the restaurant, they will still offer take-away (this is not something restaurants usually offer here). I’ve seen plenty of people still smiling while out and about this weekend … although some of them should be exercising more social distancing!! I’m choosing to see this as an opportunity to explore Brussels in new and responsible ways that adhere to the need for social distancing, but also allow me to appreciate the city and our neighborhood from a different perspective.

The end of February and beginning of March brought daily rain, sleet, and hail so it was a welcome relief to wake up to sunny skies the past two Saturdays. We took advantage of the improved weather to spend plenty of time in parks. Last Saturday we grabbed bagel sandwiches and coffee and walked to our beloved Bois de la Cambre park to find a bench with a view.  We were far from the only ones out – everybody in Brussels heads outdoors at the first sign of sun.

Our discovery of the day was a “newish” café tucked into the woods of the park – credit to Dan for spotting this hidden gem on a recent run in the park Le Flore. We opted for a table in the sun and enjoyed a beer and glass of wine, quite pleased with ourselves for our newest find while joking about keeping this place a secret. 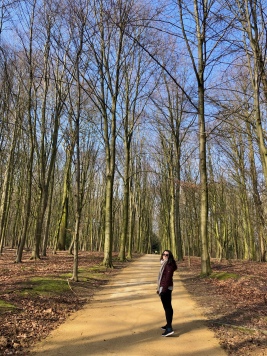 The following day wasn’t as nice, but we embraced the mist and headed out to the Sonian Forest for a 10-mile run. Our half marathon in Prague had not yet been called off and so we were still heeding our training plan.  The trails were muddy and we even got lost a few times, but we embraced the opportunity to explore less-traveled paths and the Hippodrome de Boitsfort before the clouds opened up and soaked us towards the end of our run.

For the next week, we watched as countries and governments debated how to address the outbreak, but the cafes and restaurants were officially closed when we woke to another sunny Saturday morning this past weekend. Usually this weather would have people eager to gather for brunch, but families seemed to calmly accept what would be the new normal and settled for strolling the streets and flocking to the parks. Eager to take advantage of the sun but wanting to practice our social distancing, we decided that a large park would offer ample area to wander without encroaching on others’ personal space. Dan had yet to see Brussels’ famed Atomium up close, so we drove over to Parc de Laeken to admire the giant metal structure from multiple angles.

Dan in front of the Atomium

The view of the Atomium from Parc de Laeken

Back at the apartment, our Saturday night plans entailed Kaitlan beating Dan in Game of Thrones themed Monopoly. Our Sunday plans included another long run in the Sonian Forest and later we were able to live-stream the service of Lake Park Lutheran Church. Our church in Milwaukee has decided to go digital during this time and we were very impressed with their quick response and adaptation to the evolving situation – it’s the first service we’ve been able to “attend” since moving to Belgium. 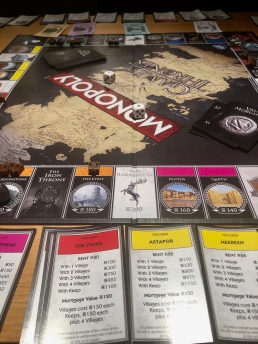 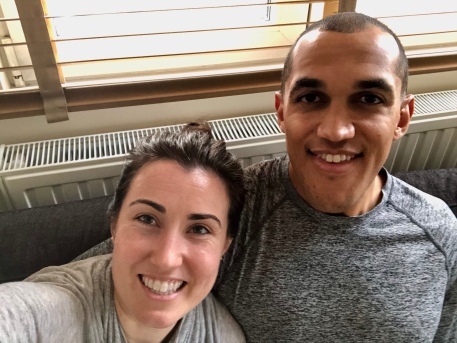 Despite the considerable measures that are being implemented, we are very much aware that this is still a developing situation and the reality is that more significant measures will be necessary to “flatten the curve” of this pandemic. Obviously, a complete lock-down is appealing to nobody, but as responsible citizens we can make the decision to apply social distancing effectively TODAY to try to contain the spread. It really is a small, but common-sense step that could have a big impact on many lives. I admit that it took me some time to grapple with the implications of this in my own life, but I am here to tell you that some separation isn’t so bad – let’s show up for each other in small but thoughtful ways now so we can get back to sports, school, business, socializing, and traveling.