A Cure For “The Busy” [Season]

A couple weekends ago, while moping about the long busy season hours and dreary Brussels weather, I decided to do a little motivational travel research and came across the name of a tiny town in the Wallonia region of Belgium that had potential for a picturesque change in scenery. It sounded like just the inspiration we needed for a short weekend getaway from rainy Brussels and endless busy season work. From the photos and brief travel guides I found online, Durbuy sounded like it had just what we were looking for- quaintness, charm, and beautiful scenery just up the street. It didn’t take long to find an Airbnb that, from looking at the pictures, seemed to be decorated to match the medieval vibes this town exudes. So on a bit of a whim, I booked the apartment and started my own research to learn more about the “Smallest Town in the World”. I then spent the next week or two learning to correctly pronounce Durbuy while my team members tried to catch me off guard with pop quizzes on the proper French enunciation.

After what seemed like a month-long endless spell of rain, the Saturday of our getaway arrived with sun and warmer temperatures to boot- our spur the moment decision to make the 1 hour 30 minute drive south to Durbuy was reaffirmed! We arrived on the outskirts of Durbuy, after winding along Wallonian roads that carved through forests and fields. It probably takes about two minutes tops to drive around “the outskirts” of the town, and that includes time to stop while pedestrians cross the street. It is a tiny town! The streets through the center of the old town are actually pedestrian access only so we headed to the public parking lot nearest our Airnbnb and were surprised by just how many people had the same idea as us- visit Durbuy on the first nice day of 2019. Parking was scarce but with some luck found a spot right in front of the big, dome-shaped rock formation that has been captivating visitors to Durbuy for quite a while now. The “waves” in the rock are actually caused by tectonic movements that have been ongoing for over 300 million years, and create an intriguing pattern in the “Roche a la Falize” or Homalius’ Rock.

For the first time in a while, we actually had some trouble locating our Airbnb and most certainly looked like lost and clueless tourists. The streets in the old town are so narrow that when orienting yourself with Apple or Google maps, it wouldn’t be unreasonable for you to think you are standing on one street but in fact you are standing on either street to the immediate left or right. After calling to consult with the friendly, French-speaking owner of our Airbnb, we finally located the apartment up a half flight of stairs and situated in a nook above the narrow, winding cobblestones. Being located smack in the middle of the old town, the apartment location couldn’t be beat and the décor did indeed suite the medieval ambiance of the city.

Without having to waste time choosing between many restaurants, we settled in at La Vieille Demeure, just a half block up the street and relished in our good fortune of finding outdoor seating to enjoy the sunny weather. It wasn’t long before we were enjoying lunch and a new beer- Durboyse Triple. After a relaxed lunch, that ended with an apple and cream crepe, we set out on foot to do some exploring. From the cobbled streets of the Old Town, we made our way towards the river to get a new perspective of this tiny city.

It was on the other side of the river that I spotted a promising set of stairs leading up a hill and into the woods. Dan knows by now that when I have my sights set on stairs leading to an unseen and potentially promising destination, I must pursue. He saw the look in my eye and let me lead the way- past the vine covered homes and colorful patio furniture, including a bath tub (?), as we ascended into the woods above Durbuy. As Durbuy is nestled at the base of two steep-sided hills along the Ourthe River, climbing above the crowds gave us excellent perspective of the size and quaintness of the city. We passed another couple on the walk up who we think were encouraging us to continue up the way as the view was worth it- they were speaking French but we managed to gather this from their gestures and smiles. Reaching the top, we were pleasantly surprised to have the scenic overlook to ourselves and took some time to appreciate the warm day before heading back down.

The promising stairs to the unknown 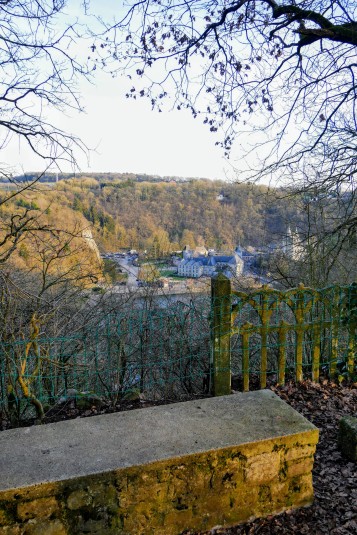 Our elevated view of Durbuy

Back on the cobbled streets, we decided our next destination was at the other end of town where Durbuy’s locally brewed beer could be found. Sadly, La Ferme au Chene brewery was not open that day, which in my mind was most disappointing because their view of the river seemed to be the best in town. Instead we opted for a drink at a bar that at first glance would seem to be trying too hard to break the mold. If the name Bar Tortuga makes you think of Pirates of the Caribbean, you have accurately described this bar’s atmosphere. Somehow, and rather surprisingly, a bar where your drinks are served to you by bartenders in head-to-toe pirate garb while you sit at high-top table made from a barrel, works in Durbuy. I can’t figure out how this place makes sense when it’s so out of place in this tiny, medieval city, but it was great! 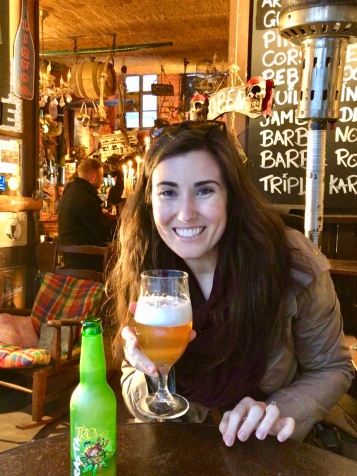 While Bar Tortuga was nailing the Caribbean vibes, and I’d gladly return for another pint served by a pirate, there is one place in town that I wouldn’t mind avoiding in the future. Unfortunately, my Saturday ended with a rough bout of food sickness that we believe originated in my dinner salad. It all started when we tried unsuccessfully to get seated at the hot spots in town, but had to settle on a hotel restaurant. I’ve said it before and I will say it again, some day we will perfect the art of making dinner reservations ahead of time… Saturday we failed at this. While we may never know for sure, I am fairly certain it was my dinner that created all the commotion that evening owing to the fact that Dan and I had eaten the same thing for lunch and shared snacks in the afternoon. He did not get sick.

Instead of our planned hike on Sunday morning, I lay in bed until we were ready to head back to Brussels where it was another gorgeous sunny day and everybody and their dog was outdoors. I enjoyed the sights and sounds from the open living room window while alternating between the couch and bed. I sincerely hope this is the last time I have to end a blog by talking about food poisoning, but it was bound to happen when travelling. It was a rough way to end our first weekend away in a while, but with our visit to Durbuy I was once again reminded how beautiful the Wallonia region of Belgium is. Here’s to an early spring in Belgium and more outdoor exploration as the weather continues to warm-up!