It has happened. We have finally identified an occasion for which you can have too much Belgian beer, and it’s probably not what you would expect. As it turns out, the famed Francesinha sandwich of Porto, Portugal is not best served covered in a Duvel. Fortunately, the boozy aftertaste dissipated with one bite of the most delicious pastry yet – the Pastéis de Nata of Lisbon. Read on for more from Portugal in this edition of Quarantine Kitchen.

The fruits of our labor – Francesinha

The fruits of our labor – Pastéis de Nata

When Portugal was added to the rotation, Dan had one request – that his favorite sandwich ever, the Francesinha, be included in the menu. I was happy to indulge that request since I figured that a sandwich would be easier to make than homemade casoncelli pasta or coq au vin. How hard could it be to layer three types of meat, cheese and bread and then smother it in a tomato and beer (with a splash of Port wine) sauce.

Interestingly, the Francesinha was inspired by an emigrant returning to Porto, Portugal from France and Belgium who was looking to adapt the croque-monsieur to the Portuguese palate. Cheese, smoked ham, linguiça sausage and steak are the substance of this giant of a sandwich. I couldn’t find linguiça or Portuguese cheese at the grocery store, but we made do with other local Belgian varieties. We commenced sandwich construction, glad that the steak and sausage cooking in the cast iron skillet didn’t set off the smoke alarms. After aggressively fanning the smoke out the windows, our sandwich was progressing nicely.

Our sauce was simmering on the stove and it was time to add the beer. While our Belgian substitutes for the meat and cheese seemed appropriate, we should not have assumed Duvel, a strong and distinctively hoppy 8.5% ABV Belgian beer, would be suitable for a tomato-based sauce topping a sandwich. Had we forgone the directions and opted for an hour or more of simmering, we probably could have cooked off some of the alcohol in the sauce. I hoped for the best as I poured in the entire bottle, but from the scent emanating from the stove I suspected that this was going to be one strong sauce.

Nonetheless it was hard not to admire our work as Dan prepared the sandwich for the final step – a quick stint in the oven to melt the cheese. We oohed and aahed as the sandwich was retrieved from the heat in all its gooey goodness and hoisted onto our plates. Optimistically, we took out first bites. We chewed slowly and then cringed slightly while registering that what had appeared to be an appetizing sandwich, had been confirmed by our taste buds to be a pungently hoppy and intensely alcohol-saturated stew. We tried another bite, but ultimately picked apart the sandwiches to salvage what had been least doused in the sauce, mainly the meat, while musing over how it could have gone so wrong. While our recipe didn’t specify that a lager or light ale should be used, it was now clear to us that this detail was key. No more cooking with Belgian strong beers, they are best consumed in their respective glass. 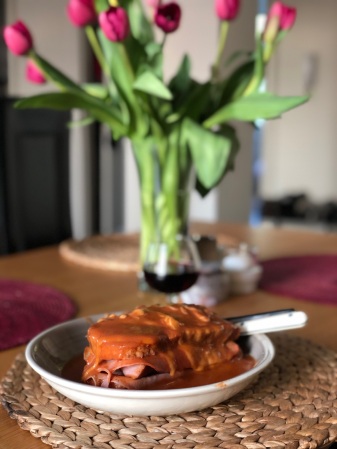 A beautiful sandwich before…

The fate of our Portuguese menu was now in the hands of Lisbon’s famed Pastéis de Nata – could this meal be redeemed by these pastries with a crispy, buttered dough and creamy custard filling? The original Portuguese Custard Tarts were created by monks at the Jerónimos Monastery prior to the 18th century. When this monastery in Belem was closed, the recipe was sold to the next-door sugar refinery, where, since 1837, the Pastéis de Belém has been made and sold by the Fábrica de Pastéis de Belém. While the original recipe is kept secret in Belém, the Pastéis de Nata custard tarts can be found in patisseries and cafes across Lisbon and beyond. The recipe and ingredients vary, but the end result is a cheap, but delicious treat! We did not make it to the Fábrica de Pastéis de Belém where they sell over 20,000 of these pastries each day but did sample these delectable tarts at a placed called Manteigaria on our visit to Lisbon in the fall. I highly recommend a visit here followed by a drink from A Ginjinha!

The beloved Ponte Luis I bridge in Porto

A lot of work goes into these unassuming tarts to ensure that they come out of a very hot oven with a flaky crust and creamy center. Preparing the dough was a particularly challenging one-person job so I quickly recruited Dan to assist. To ensure a super flaky and crispy crust, the proper sequence involves dotting and then spreading the butter across the dough, followed by folding the dough over onto itself, and then rotating it 90° before rolling it out again and repeating two more times. This ensures that all that butter is enveloped in the dough before it is rolled into a log and chilled.

The custard was comparatively easy to prep, and I knew I was in the home stretch as I sliced the log of dough and flattened the pieces into the muffin cups. With the pouring of the custard into the tin, I crossed my fingers and hoped for the best from our oven. You are supposed to bake the tarts at 550°F (290°C), but of course our oven only heats to 250°C so I kept a close eye on them as they baked. I practically jumped for joy upon removing them from the oven and finding that they looked as they should. With a little cinnamon and powdered sugar on top, I did a happy dance when I took my first bite and immediately crowned these my best dessert yet! 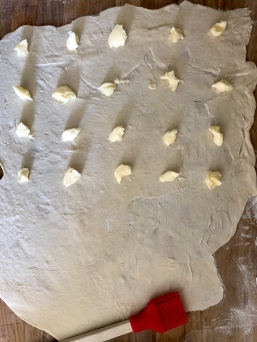 No shortage of butter here 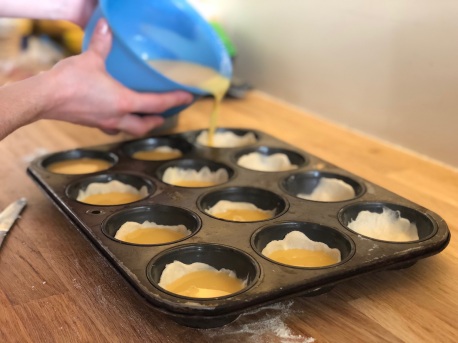 Pouring the custard into the dough-filled cups

I have to give a shout-out to two culinary gurus whose instructions are partially responsible for our success. I found the superb recipe for the Pastéis de Nata on Leite’s Culinaria and appreciated the detailed instructions – key when taking on a new type of pastry. The directions also included an extremely helpful video featuring Cupcake Jemma, known as the pastry queen of London, demonstrating how to prepare the dough. Personally, I think she may have stretched the truth a bit in declaring that making these pastries is “much easier than you think”. At one point while we were rotating the dough, I said to Dan, “It’s not perfect and I don’t care anymore, I’m just going to keep going.” Keep going I did and boy I am glad I did. I was so pleased with the Pastéis de Nata that for a few minutes I forgot out about our soiled sandwiches.

In addition to hosting us for dinner, our dining table has hosted two consecutive game nights. In both cribbage and a high-stakes game of War combined with mini-Jenga, I once again bested Dan (he’s still upset about losing to me in Monopoly back in March). Since we’ve been spending more time at the table, it’s nice to have a colorful centerpiece in the form of tulips delivered to us by our ex-pat friends on bikes.

Today, May 4th marks the beginning of Phase 1 of the country’s plan for a gradual easing of its coronavirus restrictions. In every practical sense, not much changes in our daily lives as a result of Phase 1 of the lockdown exit strategy: remote working remains the norm, but more outdoor activities are now allowed, and fabric stores have been reopened as we are encouraged to continue wearing mouth masks. We eagerly await June 8th as it marks the targeted Phase 3 of the exit strategy, at which point restaurants, bars, and cafes, and some summer activities will be considered for reopening. While I count down the days until June, you can find me churning out more successes and failures in our Quarantine Kitchen.