The second leg of our road trip took us along the southeast coast through Cartagena, another port city that seems to be less familiar to foreign tourists. That didn’t scare us off though, and we were happy to have the beaches, historical sites, and panoramic vistas, but not the grocery store, to ourselves. While visiting, we learned about the Lady of Elche and how to eat stuffed seafood, thankful for another opportunity to enjoy a spectacular sunset.

Our eccentric host, Alfonso, and his boisterous pup, Colón, greeted us upon arrival at the “atico” apartment situated just outside Cartagena. We selected this unique Airbnb on account of it offering spacious quarters and two private, outdoor verandas that we knew would be put to good use on sun-filled mornings during our stay. What it lacked in privacy (i.e. only a curtain covering the toilet stall), it more than made up for with a friendly host, comfortable accommodations, and an inviting Mudéjar aesthetic.

We looked forward to settling in later that evening, but a trip to Cartagena city center for a very late Sunday dinner was our first priority. Google led us astray (for not the first or last time on this trip) and indicated that the couple of places we were interested in were open and serving hungry guests, but we were disappointed to find the lights off and doors locked when we arrived. Instead we grabbed a seat outdoors at the popular local pizzeria, Mano a Mano, which ended up being a delicious fit for two last minute diners. A stop at Gelateria del Bianco for our second round of gelato that day was the perfect end to our meal before we returned to the Airbnb to settle in for the night.

With a full day ahead of us and no set plans, we awoke slowly the next morning and enjoyed the view from the patios with coffee and tea in hand before heading back into Cartagena for lunch. Alfonso had recommended the sea-side establishment of Club Nautico Santa Lucia, and after some initial confusion over the parking and entrance, we were seated with a view of the marina. Our seafood spread included fried prawns, shrimp cakes, fried calamari, and whole stuffed squid. This is where I admit that when the plates arrived, we realized we were pretty clueless as to how you go about eating a whole stuffed squid… I vaguely recalled there being a part you were not supposed to eat, so we gave Google an opportunity to redeem itself from its recent failures and did some quick research on cephalopod consumption. I guess we also should have done a quick check on how to go about eating fried prawns because when we were about half way through the large serving, I realized that our tedious removal of the deep fried tail and legs wasn’t necessary. Spying on our neighbors digging into their plate of fried prawns, I observed that their primary concern was simply the removal of the head before plopping the rest of the small crustacean in their mouth. In an “aha” moment, I recalled from my days as a Sevillano that the process of frying small fish effectively disintegrates the bones, or in this case the legs of the prawn, and therefore the entire crispy snack (minus the head) was edible.

Our seafood spread at Club Nautico Santa Lucia in Cartagena

Not only did our post-lunch walk aid in digestion, it afforded us an opportunity to see the Roman amphitheater situated right in the middle of Cartagena. The second largest Roman amphitheater on the Iberian Peninsula was only discovered in 1988 after centuries of construction directly on top of the theater. While the museum wasn’t open that day, we were able to walk around the restored site to view the 6,000 person seating area that was carved directly into the rocks. 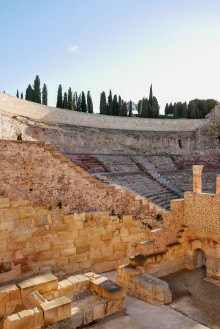 The Roman amphitheater in Cartagena

Dan and the amphitheater below

After completing our small scale tour of Cartagena, we were back in the car, but this time only headed on a mini road trip to Calblanque Regional Park and its beaches for yet another sunset excursion. Following the signs to the beach at Playa Larga, we again found ourselves on a single lane unpaved road flanked with signs alerting drivers to the wildlife, more specifically, the hares. With our car parked in the empty lot, we followed the boardwalk down to the beach. The only other person we passed on the way was a man in nothing but a speedo who appeared to have recently emerged from the ocean. I tested the water and it wasn’t too warm… brave guy! That being said, this is a very popular beach during the summer and holiday season, but yet again, we had it all to ourselves. 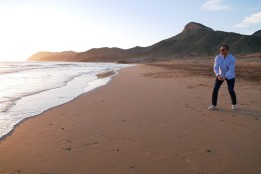 Dan doing what he does best – skipping rocks on Playa Larga

The dunes and beach at Playa Larga

We had some time to walk the endless shore before the sunset, but when the sun dipped into the ocean, we were treated to another glorious glow radiating off the water. Framed by the dunes and jagged hills, we were took in the ethereal cotton candy skies as the sun slowly descended – it was another unbelievably peaceful evening where I couldn’t help but wonder how it was possible that we had this piece of paradise to ourselves.

Dunes and cotton candy skies at the beach

Unfortunately, our tranquility at the beach quickly escalated into Christmas consumer chaos. Back in Cartagena, we pulled into a huge shopping complex that housed a mall, gym, Toys “R” Us, multiple furniture stores, and way at the back of the maze, the grocery store. The intent was to make a quick stop at Carrefour for groceries for our dinner at the apartment that evening, but all hopes of an efficient shopping trip ended after driving in circles looking for parking and avoiding rogue people and shopping carts. I don’t recall having ever visited Walmart two days before Christmas, but I can imagine that shopping at this Carrefour grocery store on December 23rd was the next closest experience. It was Walmart super-sized and I think that just about everyone in Cartagena was doing their shopping at the same time. Thankful to make it out alive and with provisions in hand, we headed back to the apartment to enjoy our steak and asparagus while relaxing with a Christmas movie in front of the space heater.

Before leaving the Airbnb the next morning, Alfonso gave us a tour of the “complex”. I say complex because it turns out that in addition to the colorful garden on the ground floor, there was another Airbnb apartment on the property. He took us around the lush garden, showing how he had created beautiful tiling from recycled materials and explaining the story behind a particular statue sitting on a pedestal. The statue that sits in Alfonso’s garden is similar to the real Lady of Elche bust, an Iberian artifact from the 4th century BC discovered north of Cartagena in the city of Elche. My interpretation from his mix of Spanish and English was that the statue in his possession was also an ancient artifact discovered in the region, albeit probably not as old as the Lade of Elche. He proudly reiterated the long history of the region and explained how the culture in Cartagena is different from that of its southern and northern neighbors in Andalucía and Catalan, respectively. It was a long farewell, as is often the case in Spain, but we departed with a better appreciation for the region and gratitude for our host’s hospitality.

Alfonso’s tiling at the atico Airbnb 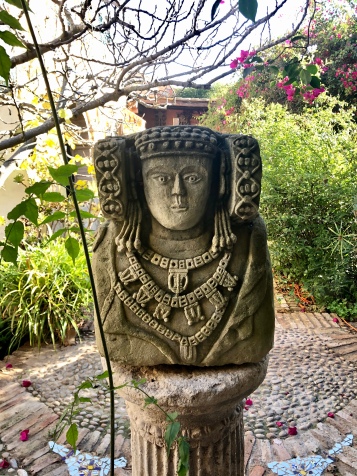 In the car for our final stretch of the road trip, we continued north towards Valencia on a warm, sunny Christmas Eve. The highway made for easy driving, but I threw Dan for a loop when I directed him to turn off onto the back roads into the coastal city of Xábia for a lunch and hiking break. It was apparent within minutes that we were far from the only tourists in town – British accents are easy to identify, especially when the conversation is taking place in front of and to the left and right of you at a café. 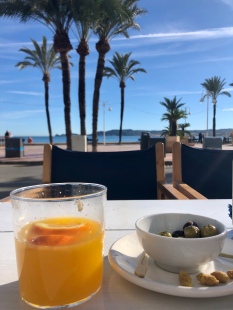 Valencia oranges and olives in Xábia 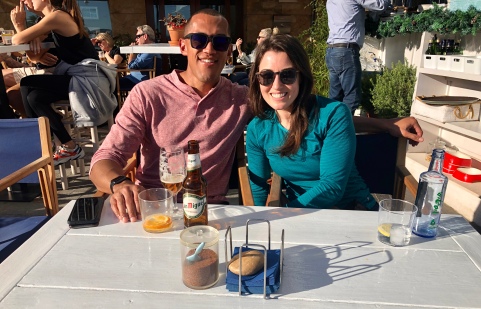 Sitting under the hot sun at Café Mira Luna, we refueled on soup (not my smartest decision) and sandwiches ahead of our leisurely hike. With our car parked at the trailhead on the far end of the Port of Xábia, we started our hike to the Mirador Cap de Sant Antoni. At about 2.5 miles (4 kilometers) round trip, it wasn’t a strenuous or long hike, but the panorama from the clifftop was excellent on a clear day. From the Cap you are supposed to have a view of the island of Ibiza but we completely forgot to look closely in that direction seeing as the view of Xábia and its coast to the south was so great. 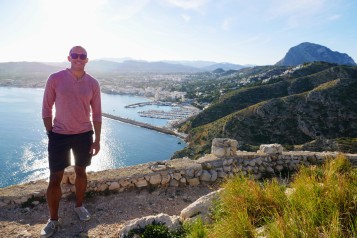 I think we crossed paths with less than five people on the way there and back making this yet another great escape from the crowds. There are actually 13 other Miradors, or lookouts, in the Xábia area that offer similarly spectacular views and are accessible on foot via well-marked trails. I would not at all mind a return visit to this charming seaside city, but unfortunately as I write this, Xábia is dealing with the aftermath of Storm Gloria which has caused severe flooding and destruction to the marina and beachfront residences and businesses. I sincerely hope there is a full recovery for this welcoming town.

The walk to/from the marina of Xàbia 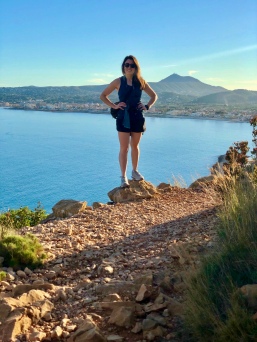 This photo looks much more dangerous than it actually was

Before getting back in the car, we walked along the long seawall to the lighthouse at the end of the breakwater. The marina was peaceful aside from the giddy group we heard enjoying themselves while swimming off the back of a boat. I was a little reluctant to leave Xábia after such a short visit, but there was no time to dwell on that upon realizing that we still had some ground to cover to get to Valencia in time to drop off the rental car, meet our Airbnb host, stop at the grocery store, AND make it to Christmas Eve dinner on time.

The lighthouse at the end of the seawall 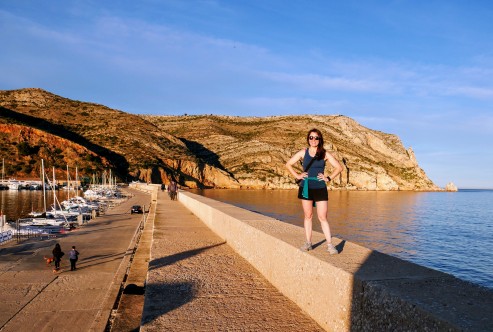 Kaitlan with the Mirador Cap de Sant Antoni in the background

Fortunately, my remorse at having to depart from Xábia so soon faded upon our arrival in Valencia. My enthusiasm for coastal Spain only grew as we completed our trip on the eastern coast in the city known for its Mediterranean style beaches, juicy oranges, paella, and Calatrava architecture. I’m looking forward to sharing more about how we spent Christmas in our final destination, a city that has promptly made its way into my favorites!