Museum of Egyptian Antiquities – What to Know & What to See

While museums all around the world contain artifacts from ancient Egypt, if you are looking for the world’s largest and most dizzying collection of Pharaonic antiquities, the Museum of Egyptian Antiquities is a mandatory stop during your visit to Cairo. There are an overwhelming 120,000 artifacts in the Museum of Egyptian Antiquities – a large percentage of them are on display and most have minimal information presented to explain their significance. For this reason, many visitors utilize a guide to navigate around the exhibits and provide context, with specific attention paid to the more impressionable articles.

During our visit in November 2019, we considered hiring a guide, but instead opted to guide ourselves, approaching our visit like an archaeological excavation – with patience and excitement about the thrill of discovery. We were happy with our decision as we didn’t feel rushed or forced to occupy a cramped space with other tour groups all vying for the same view. We took our time viewing the exhibits we were most interested in and could wait until the larger groups had moved away from a popular exhibit in order to view the artifacts up close for ourselves.

It’s certainly possible that in not hiring a guide we did miss out on some interesting facts and additional context, however, we felt informed and well-prepared having taken the below steps to ensure that we would get the most of our visit:

I’ve already recommended a source to assist you with the first point above, and the good news is that I can also help with the second point. If you too are interested in visiting the museum without a guide, I’m happy to provide you with a resource for navigating the seemingly endless rooms filled with treasured artifacts from the Predynastic Period through the Greco-Roman Period.

I’ve created this guide to assist you in both preparing for your visit and navigating yourself once you are at the museum as it details some of the most recognizable artifacts in the exhibits and furthermore how to approach your tour chronologically. Of course, you will find many other interesting and notable artifacts that are not listed here, but that’s why I encourage you to approach your visit with anticipation of the thrill of discovery. Let’s begin!

You’ve passed through the first security check into the courtyard of the Museum of Egyptian Antiquities. While you wander amongst the groups of school children, you’ll get an up close look at this iconic pink building as well as the assorted and unlabeled statues, obelisks, stones, and other materials (haphazardly) arranged across the lawn.

Upon passing through another security check at the building entrance, you will find yourself in a lobby with halls sprawling in three directions in front of you. Take a couple steps into this lobby and locate the following artifacts just off the right and straight ahead, respectively: 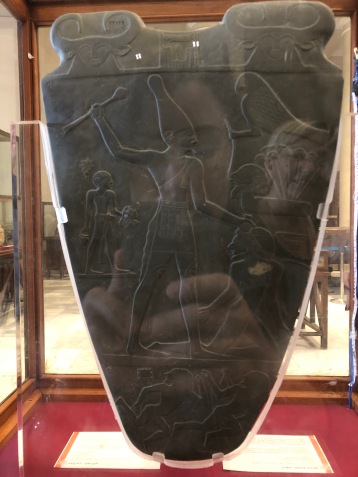 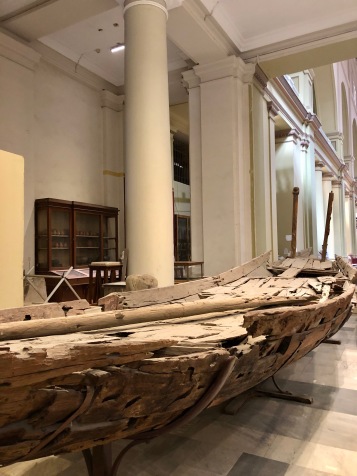 If you are having trouble finding the Narmer Palate, locate this solar boat which is next to it

If you are conducting your tour chronologically as I would propose, retrace your steps in the lobby and take a right (or a left if you are still standing with the entrance at your back) into the halls of the Old Kingdom. Within the Old Kingdom exhibit you will find the following artifacts:

Statue with the triad of the Pharaoh Menkaure, Hathor, and a goddess 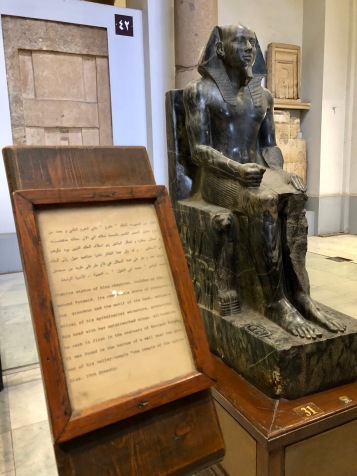 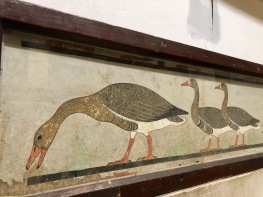 Paintings of the Meidum Geese

Well-preserved and beautiful statues of Rahotep and his wife Nofret

You will next find yourself in the halls of the Middle Kingdom, where you can find the following artifacts:

Colossus of the Pharaoh Mentuhotep 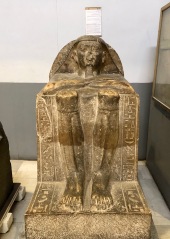 Before you reach the end of this gallery, you will see the sign for the New Kingdom. Within the New Kingdom exhibit, you can find the following artifacts: 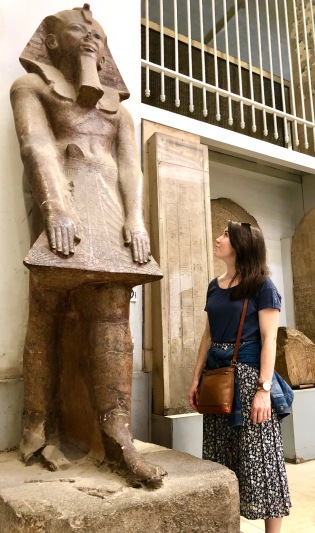 Statue of the Pharaoh Hatshepsut 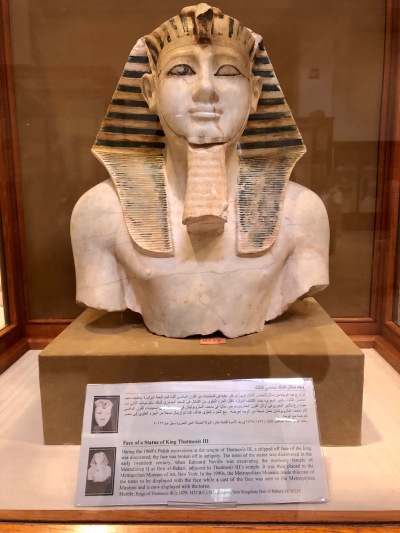 The original face from a statue of Thutmosis III

The red & round room

Statue of the Pharaoh Ramesses II as a child

From here, you can continue through a long gallery with more objects from New Kingdom plus the Late and Greco-Roman Periods. At the end of this long gallery, there is a room with a rotating special exhibition. Turning the corner you will see a large quantity of sarcophagi and also the entrance where you began your tour.

Proceeding up the stairs to the second floor, you can find the following artifacts on display:

The Papyrus of Yuya

The King Tut gallery and the Royal Mummies Hall are both on the second floor and are the most well-known and popular exhibits at the museum. The entrances to both are well-marked and the small additional admission fee for the Royal Mummies is paid (in cash only) at the booth right before you enter. Photos are not allowed in either exhibit.

The King Tut gallery contains the famous golden mask of the boy king and a remarkable display of the other treasures buried with him. I won’t go into too much detail, but just know that it’s a can’t miss visit of the museum!

The spine-tingling Royal Mummies Halls contains the astonishingly well-preserved mummies of some of Egypt’s most well-known Pharaohs spread out between an east and west wing. The mummies are displayed in cases, each labeled with the identity and information about their health, age, family, etc.  In my opinion, the unique exhibit is most definitely worth a visit to appreciate the precise process of mummification that would have taken place on these Egyptian royals thousands of years ago.

Having completed your visit of the upper level, you’ve made it through the Museum of Egyptian Antiquities and all that’s left is the gift shop and cafe. Yes, touring the museum can feel overwhelming, but the good news is that construction of the new Grand Egyptian Museum at Giza is underway and it looks like it will be a beautiful site. As of the end of 2019 it’s not yet clear when the exhibits in the Cairo museum will be relocated there though. Until then, I hope that this guide serves you well in your visit and you can appreciate the extensive collection of antiquities.