It’s been 7.5 years since I visited Switzerland while studying abroad. That was my first time in the country and it blew my mind that a place like this existed. As our recent trip approached, I found myself wondering if I would be as impressed this time as I had been when I had stepped off the train in Interlaken in the spring of 2011 and realized I was surrounded by mountains. Clearly I had forgotten just how powerful that feeling is because there was no shortage of “awe inspiring” moments this time around, even with a challenging start to the trip (more on that below). When we did cross the border into Switzerland, it didn’t take long for me to remember why I love this place so much- no matter where you are in this country, it offers some of the most breath-taking views I’ve seen.

We ended up booking our trip to Switzerland at the end of October, which is by all accounts the off-season, in between the summer hiking and winter ski seasons. There were both positives and negatives to this timing, but Dan and I had been looking for a destination half marathon to run this fall, and the date worked well seeing as we had two vacation days for All Saints Day during the week following the Sunday run. So, without knowing too much about the city of Lausanne, other than it being located in Lake Geneva in the French-speaking region of the country, we decided to buy very cheap plane tickets and make a week-long trip out of it.

The Friday of our flight arrived and shortly before noon Dan texted me to say that our flight to Geneva had been cancelled without a specified reason. My team then informed me that there were strikes by baggage workers at the Brussels airport so many of the incoming and outgoing flights that weekend were being cancelled. Experience has taught me that this situation, while very annoying and inconveniencing, is one where you just have to roll with it and figure out an alternative plan. So after looking at other flights, trains, and car rentals, we concluded that the best (i.e. fastest & most affordable) option was to forgo our flights altogether, skip Friday night in Geneva, pack up Dan’s car, and hit the road first thing Saturday morning to make the ~8 hour drive to Lausanne. Fortunately, we had a car and flexible schedule at our disposal, which allowed us to actually make it to Switzerland.

The race wasn’t until Sunday afternoon, which seemed strange at the time we signed up, but ended up working out well for us. The drive from Brussels to Switzerland took us south through Belgium, Luxembourg, France, and finally across the mountains into Switzerland- it was a scenic drive the entire way and a great way to see the fall foliage and rolling hills in France. We stopped for lunch along the way so by the time we crossed the “low-key” border between the EU and Switzerland, it was late afternoon on a gloomy and rainy Saturday. 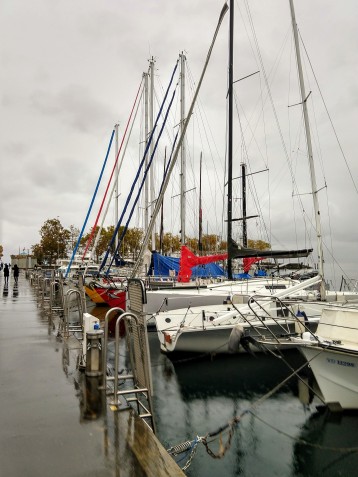 We picked up our race packets and tried to catch a glimpse of the mountains through the fog across Lake Geneva before our delicious pre-race pasta dinner. The weather was forecasted to be cool and rainy for our race so we were pleasantly surprised when the rain cleared and the fog lifted on Sunday morning just before we boarded our train for a quick ride to the start line- approximately 13.1 miles out from Lausanne in La Tour-de-Peilz. We joined the other runners in the town center and I (not Dan) partook in the organized pre-race warm-up of dancing and stretching before the race had started and we were on our way back to Lausanne. I have to say that this race had the most fantastic scenery the entire way! On our left was the lake and to our right were the vineyards lining the steep slopes between small towns. When we would go through these small towns, there would be people lining the very narrow streets, creating what I would best describe as cheer tunnels. I don’t know if it was the scenery, weather, or cheering, but that was one of the most fun races I’ve run, and even with stopping to take pictures, we still finished under 1 hour 50 minutes, a PR for Dan! We were rewarded with warm soup broth and Rivella soft drink (Dan’s new favorite beverage) at the finish and snapped a few pictures before making our walk back to our very spacious and comfortable AirBnB- perfect for post-race relaxation. We enjoyed a delicious dinner of local venison before calling it an early night to give our legs a break ahead of the next day’s adventure. 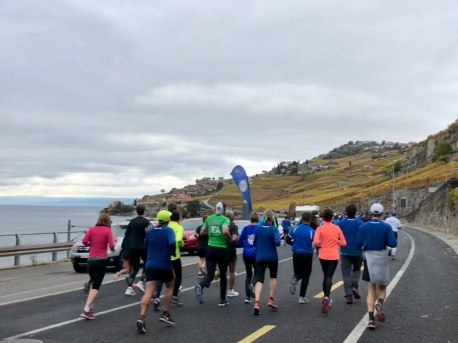 One of the endlessly spectacular views along the route

Once we made it to Lausanne, we figured it would be best to leave our car there for the week and take the trains as we had already purchased our tickets online and I knew that the trains in Switzerland offer incredible views of the scenery between cities, not to mention, they are clean and run very frequently. What’s also nice about the Swiss trains is that when you purchase a ticket online ahead of time, you have the flexibility to take any train along that route during that same day. We had originally intended to leave Lausanne earlier on Monday, but given our condensed time in the city, decided we would take a later train so we could spend the morning at Château Chillon.

A 20 minute train ride brought us to Veytaux where we were able to walk along the lake and take in the great views of the château before starting our tour inside the walls. The chateau dates back to the 12th century and is known for its dungeons that are carved from the very rock that also supports the building foundations. It was also the inspiration for the castle in the Little Mermaid. I would also give it recognition for its stunning panoramas both inside and outside the walls of the château. Even though we visited on a day when the skies were not completely clear and the tops of the Alps didn’t show themselves, it was still Disney-level magical. 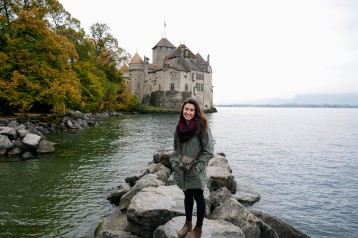 Can’t get enough of Château Chillon 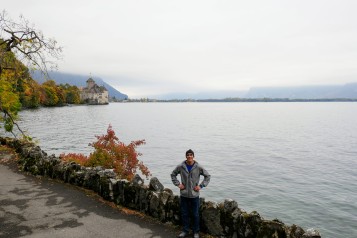 Can’t get enough of Château Chillon

Apparently, this is Switzerland’s most visited historical landmark, but thanks to our early Monday morning arrival during the tourist off-season and the overcast skies, we almost had the place to ourselves. It was nice being able to tour the dungeons with Lord Byron’s signature carved into a pillar and walk along the ramparts without pushing past hordes of people. We decided we’re definitely willing to put up with a little cold if it means less crowds stuffed into small spaces where everyone is jostling to take the same picture. Seeing the château against the fall colors was a highlight for me and a must visit if you’re in the area of Lake Geneva.

An impressive castle from the dungeons to the tower

An impressive castle from the dungeons to the tower 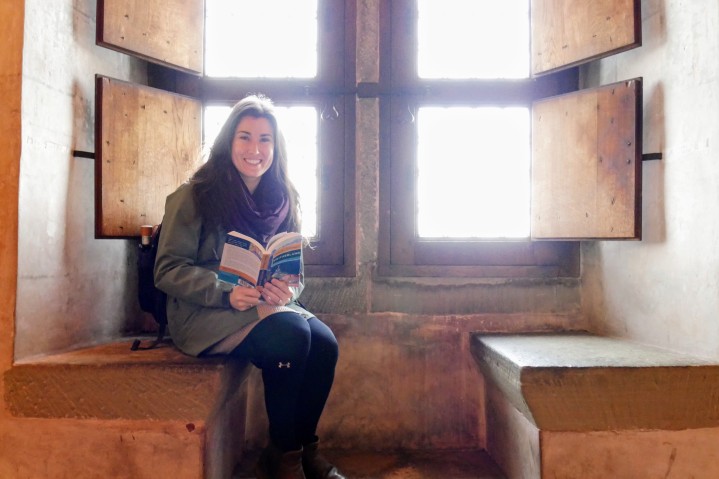 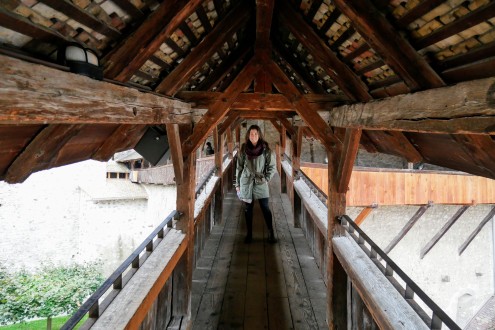 We had the place to ourselves!

We had the place to ourselves!

After our peaceful morning at Château Chillon we grabbed our luggage and boarded our train to Zermatt with one goal- see the Matterhorn Mountain. Seeing the Matterhorn Mt. has been on my bucket-list for a long time and there’s a reason it hasn’t happened yet- it’s not exactly easy to get to and there is a big risk that should you make it within eye-sight of the mountain, you won’t actually see it, due to often unpredictable weather conditions. The Matterhorn is one of the tallest peaks in the Alps but is more widely recognized for its unique pyramid-like shape. While standing at just under 14.7k feet, it towers over its close neighbors and presents a challenge to those wanting to climb it. We had no intention of climbing it, but were hoping to get catch a glimpse from Zermatt, the small ski town we’d be staying in, and hike in the area of the five lakes for even better views. Knowing that the weather in the mountains is always unpredictable, we didn’t get too upset when we saw the forecast for snow spanning the 24 hours of our time in Zermatt, but we certainly weren’t optimistic either. In the final leg of our train ride, about an hour out from Zermatt, we realized that we would need to lower our expectations.

From our cozy window seats on the small train we watched as the rain turned to snow in the mountains and when we finally disembarked in Zermatt, we were greeted by a winter wonderland- great for getting in the spirit of Christmas, but not so good for Matterhorn viewing. Refusing to let the conditions ruin our brief stay, we took advantage of our hotel’s cozy bar and ordered some mulled wine (Glühwein) while we researched options for the next day’s snow hike before dinner. Speaking of dinner, we embraced the local cuisine and indulged in our very own pot of truffle fondue.

I’ve got plenty more to share on the Matterhorn and the rest of our Swiss trip, but decided it’s best to make this a two part blog in order to add some suspense about our visit to Zermatt and also avoid getting long-winded. Part two to come soon with more on the Matterhorn plus our final stop in Lucerne.