The Best and Currywurst of Berlin

I visited Berlin for the first time over six years ago and while it was a great stay with no shortage of sites, bikes and beers, my visit this time around delved into the more recent history of this 750 plus years old city. With an extensive record in the arts, sciences, manufacturing, and military affairs, to name a few categories, this visit afforded me an opportunity to learn more about the wall that divided a people and country physically and emotionally.  Visiting just after the 30th anniversary of the fall of Berlin Wall and staying in East Berlin brought new perspective to a city that has earned a reputation as a place of both destruction and transformation. Participating in a tour led by a Berlin local provided greater understanding of the reunification after the fall of the wall and our visits to museums documenting the horrors carried out during WWII reminded me of our world’s not so distant past. Berlin has history, culture, education, and entertainment to offer its residents and visitors, and is easily a city that could be explored with a new perspective gained on each visit.

Our weekend visit to Berlin officially kicked off the morning after our late Friday arrival when I got an early start and headed out on a run through Alexanderplatz and past the Berlin Cathedral along the Spree River. I was appreciative of the nicely groomed path along the river and only partially cloudy skies that looked like they might just refrain from emitting their typical November rain showers during our stay.

A little while later, Dan and I hopped on the S-Bahn train to head to Warschauer Station, which was the meeting point of our Secret Food Tour of East Berlin. We found our guide, Alex, and the rest of the small group, and were on our way in no time to the first stop – schnitzel. We washed our delicious schnitzel sandwich down with a German beer that we were surprised to learn could be taken to go.

We walked with beers in hand to the next stop of the tour back up near the station and took a seat on an outdoor picnic table where we were served currywurst. As we dug in, Alex shared the history of this iconic German street food and explained the difference between the East and West currywurst. Consisting of sausage, ketchup, and curry powder, this staple of Berlin has been around since post WWII when a resourceful German woman, Herta Heuwer, concocted the dish using the few ingredients at her disposal – the city and its wurst reputation hasn’t been the same since (yes, that’s a bad joke).

On our way to the next stop, Alex took us through the Revaler Street area of Friedrichshain which I can best describe as an outdoor artistic space that embraces both the sub and pop cultures, and where old is reused for the new. Alex noted the significant damage sustained from Allied forces’ bombing of this area of East Berlin during WWII on account of it accommodating many industries supporting the German war effort. The residents and squatters of Friedrichshain revived the neighborhood after the war and found ways to create a new culture from what remained. As evidence of this repurposing, Alex pointed out the phone box turned disco booth and bomb shelter made into a climbing wall, as well as the famous Cassiopeia nightclub housed in a former industrial warehouse. The area is insistent on maintaining its creative and independent spirit; perhaps not unsurprisingly then, a McDonalds didn’t fare well when it moved in near to the neighborhood a number of years ago. 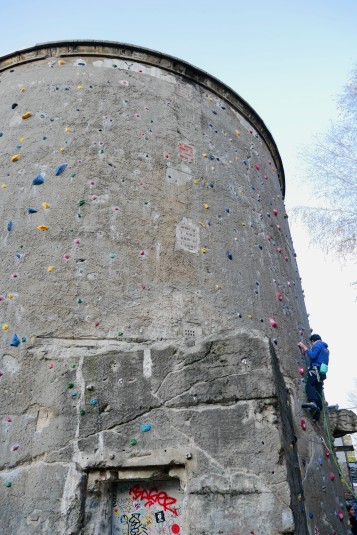 A short walk away was our third stop of the tour, this time at an Iraqi restaurant where we were served a fabulous doner kebab and warm mint tea while Alex enlightened us to the multi-ethnic population of Berlin. The city is in fact home to the largest Turkish population outside of Turkey, while Poles, Russians, and Arabs make up the next largest ethnic minority groups. Much of this multicultural evolution coincides with Germany’s “guest worker” program that was created after WWII to fulfill the shortage of labor through the recruitment of persons from outside of Germany. Our guide Alex explained that eating doner kebab is as much an integral part of growing up in Berlin as is eating currywurst.

A quick visit to a small dried fruits and nuts store followed, which again highlighted the city’s strong ties with its Middle Eastern immigrant population. A handful of the sweet and roasted assorted nuts was not enough and what I really wanted to do was run back in and ask for a large to-go bag.

To complete the tour, our final stop was at Blechbilderbar for a very traditional meal of flammkucken, apple dumplings, and a dunkel beer. While we shared the food, Alex divulged more about life in Berlin post WWII, and more specifically, his perspective on life in East and West Berlin since the fall of the wall. We talked about the political climate in Germany and how wage disparities and ideologies still divide the city and country. As is the case in many countries, frustrations have given rise to tension around politics, race and religion in Germany. We conversed candidly as a group and appreciated Alex’s openness to sharing his perspective as someone who was born in East Berlin but grew up in a unified and evolving Berlin. 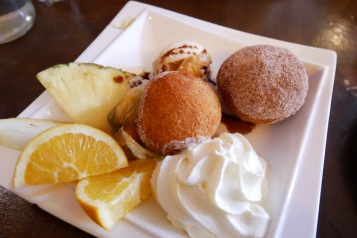 Appreciative of yet another fantastic food tour with a side of history and culture, Dan and I made our way back towards the Spree River to visit the East Side Gallery. At 1,316 meters long, the canvas for this gallery is in fact the largest remaining section of the inner portion of the Berlin Wall. Having been transformed by murals dedicated to freedom, peace, and societal progress, you can walk right alongside this open-air gallery admiring the artwork while reflecting on what life looked like for those impacted by the wall that not only physically, but mentally, divided a city.

Mural found at the East Side Gallery

Mural found at the East Side Gallery

Making our way west, we passed through the open-air Holzmarkt along the Spree River where food, small-shops, and culture come together. Preparations were underway for the outdoor Christmas market, so after a quick pass through we were ready to keep moving. Utilizing Berlin’s convenient and easy to navigate transit system, we headed yet further west to the former site of the headquarters of the Gestapo and SS where the Topography of Terror Museum resides. The museum documents the rise of the Nazi party in Germany, the crimes committed under their regime and how its members were (or were not) held accountable for their war crimes. The museum serves as a very poignant reminder of the atrocities committed by those in power and persecution experienced by specifically targeted minorities.

Having spent most of our day on the East Side of Berlin, we opted for pre-dinner drinks at BRLO Brewery and dinner at the Austrian restaurant, Sissi, both on the west side of the city. Reflecting on the intolerance and devastation enforced under the Nazi regime, as reinforced by our visit to the Topography of Terror Museum, I was uplifted by the evidence of inclusivity in this West Berlin neighborhood while observing the many LGBTQ pride flags hung from businesses. Before calling it a night after dinner, we made one last stop back in East Berlin for a drink at a bar called John Muir, as an homage to my shared alma mater with this famous naturalist.

The next morning, we again made our way west on foot via the commercialized Alexanderplatz where preparations for the Christmas Market were underway, and then took the scenic way past the Berlin Cathedral situated on the Museuminsel (Museum Island). 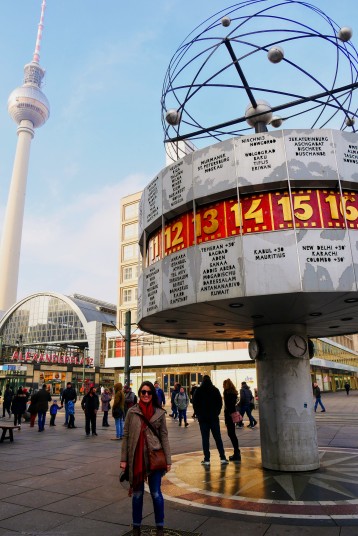 Along the way, I couldn’t resist a photo opportunity with the famous Ampelmännchen. Former pedestrian cross-walk signal of the communist side of the city turned beloved emblem of present-day Berlin, the figure gained notoriety after reunification as one of the few aspects of East German communism to not only survive, but thrive… especially thanks to tourists like me!

Our path took us to the Palace of Tears where we learned about the checkpoint introduced at the Friedrichstraẞe railway station in 1962. The site of strict border control and thus many tearful departures, the stories in the exhibit recount the divisions created between families that lived on opposite sides of the wall.  Not long after concluding our visit to the Palace of Tears, we reached the front lawn of the Reichstag building. With its glass dome representing a modern and new beginning for unified Germany, the Bundestag, or German federal parliament, now meets within. Unfortunately we did not plan far enough in advance to book tickets to tour the dome, but viewing the impressive structure from the front lawn allows you to appreciate this storied building that first opened in 1894.

From the Reichstag, the Brandenburg Gate was a short walk away through the eastern edge of the Tiergarten. Built under Prussian king Frederick William II in the 18th century, the monument was originally erected to symbolize peace. For almost 30 years, the gate stood between East and West Berlin before becoming the site of the official reunification ceremony of Germany. Today, it attracts plenty of tourists and protestors alike. Fittingly, not so far from this iconic Berlin landmark, we chose the Alt-Berliner Wirsthaus for a last traditional German meal before our departure.

Our final stop of our visit was to the Memorial to the Murdered Jews of Europe, which is located within view of the Reichstag and a block from the Brandenburg Gate. The memorial at street-level consists of gray, rectangular pillars in an orderly grid that slopes downward to a central point at which the pillars rise high above you. The memorial is open to the interpretation of each visitor, but from my perspective, it leaves you feeling isolated and overpowered. The information center underneath the memorial cannot be missed as it shares the history of the Final Solution and details the fate of Jewish families as told through letters, stories, and photos. The final room is called the Room of Names and aims to give life to the six million Jews murdered or missing on account of the Nazi atrocities. A continual audio streams these persons’ short biographies in multiple languages. 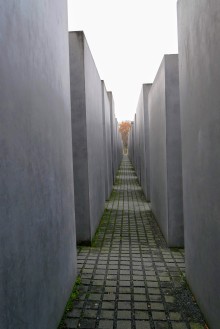 The Memorial to the Murdered Jews of Europe

The Memorial to the Murdered Jews of Europe

Visiting Berlin presents opportunities to experience the art, food or culture firsthand with the help of a local, and learn about history at a museum erected on the former headquarters of an abhorrent fascist agency. These in-person experiences are meaningful as they add another dimension to what we have previously studied or hear in passing on the news. Seeing a place for myself or speaking with someone with ties to the area is an explicit reminder of the magnitude of a historical event and how it’s feasible that it happened in the first place. I thought I had a general understanding of Berlin and what it encompassed, but after this most recent visit, I better appreciate that this is a multidimensional city best experienced with an open mind and an appreciation for its continual evolution.  It wasn’t long after our arrival that I realized I still had a lot to learn and discover about Berlin and fortunately there are plenty of ways to do so no matter how you chose to approach your experience.