There is an exquisite beauty in Egypt that is made all the more impressive when you understand the history of civilization that is encapsulated by hieroglyphs, statue fragments, and embalmed mummies. While this alone is meaningful, it should be considered in conjunction with the evolution of a society and culture encompassing five thousand years that more recently has undergone a revolution and is contending with the tensions that arise in a turbulent region of the world. With some advance preparation and an open mind, a visit to Cairo is incredibly rewarding.

In the morning you can enjoy a roof-top breakfast with a view of the only surviving Wonder of the Ancient World, by day you can crawl into some of the earliest pyramids built, at sunset you can take in the expansive city atop the Cairo Citadel, and in the evening you can wander the chaotic markets of Old Cairo. While perhaps not advisable to do all this in 24 hours, there is no shortage of places to see with the one or many days that you have in Cairo.

Your guide may not accompany you to every part of your visit to the archaeological sites as there are certain areas where they are not allowed to act as a guide. Such was the case when we entered a mastaba in Saqqara – an attendant took us inside while our guide waited outside for us. We were expected to tip this attendant a small amount in return.

The same counter that processes the visa is also where you can also exchange money for the local currency, the Egyptian Pound (EGP). This is in fact a good time to exchange for the Pound as Egypt is not only a cash-based society, but it also has a culture of tipping. Whenever possible, request Egyptian Pounds in small denominations for the obligatory baksheesh expected throughout your visit (more on this below).  The current exchange rate is around 1 EUR = 18 EGP and 1 USD = 16 EGP.

On the topic of crime and safety, you will encounter security checks at the entrances to practically all sites, businesses, and hotels. The checks will require you to pass through a metal detector and/or have your belongings screened by an X-ray machine or security personnel. Follow the instructions and gestures of the attendants when in doubt about the screening requirements.

Plan to pay all admission with EGP, anticipating that you may need to have more cash on hand than initially planned. Your guide or your hotel can assist you in finding an ATM.

If instead of taking an Uber, you find yourself walking in Cairo, take personal responsibility for your safety when crossing streets and DO NOT expect that the cars will stop for you as the pedestrian. If you find yourself needing to cross a busy street when you are not at a controlled intersection, cross with locals and signal your intent to cross by holding your hand up to the oncoming drivers. You will still likely end up in a game of leap frog so pay attention to the vehicles that are or are not slowing down.

Another option in Giza is the Marriott Mena House, which is well-equipped for those looking for luxurious accommodations. Even if you aren’t staying at the hotel, the 139 Lounge Bar & Terrace is a relaxing spot for dinner overlooking the pyramids.

The interior of the Bent Pyramid has only been open to the public since July 2019.  If you don’t mind claustrophobic conditions or bats (found in the very last chamber) I would recommend mustering the courage to tour the interior. Entrance to the pyramid is by way of a raised entrance on the north side and upon entering, you will immediately descend into a steep and very confined tunnel before you ascend a wooden staircase and then crawl through another tunnel to reach the chambers within. 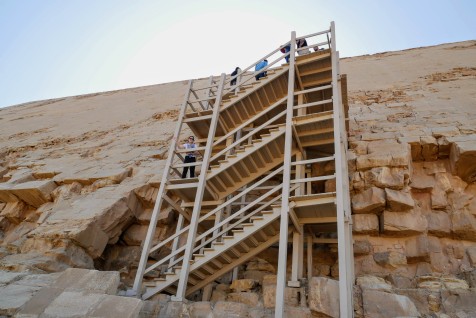 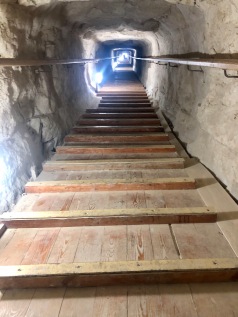 The tunnel through which you descend and then ascend

Climbing the pyramids is not allowed; however you can scale the steps to the entrance of the Great Pyramid without being scolded by guards. You will need to pay for a separate ticket to enter the pyramids, but know that there are no mummies inside as they were moved to the museum. For a view of all the pyramids from a further distance, there is a road behind the pyramids that leads to a decent spot for photos, or can you pay to take a camel further into the desert for an even more impressive panorama.

The Great Pyramid up close

A ticket to the pyramid complex also includes your visit to the Sphinx. Before you see the Sphinx from the very popular side angle, while still outside the fence in front, step off to the right (when facing the Sphinx) to take in a panoramic view that includes the three largest pyramids and far less crowds. There is also a Solar Boat Museum adjacent to the Great Pyramid, which can be accessed with a separate ticket.

The Sphinx and Pyramids of Giza

If you choose to tour independently, I’ve created a separate guide for visiting the museum to assist you in your visit. This guide details some of the most notable artifacts in the museum, including, but certainly not limited to:

The courtyard of the Egyptian Antiquities Museum

Also contained within the Citadel walls are four mosques, of which we visited the Mosque of Muhammad Ali. The public is welcome to enter provided you enter shoe-less (carry them in your hands), and while I was not certain that my hair needed to be covered, I did so nonetheless. An interesting fact about the mosque is that the clock tower in the courtyard was a reciprocal gift from France after the obelisk now standing in Paris’ Place de la Concorde was removed from Luxor Temple and “gifted” by Egypt.

The Mosque of Muhammad Ali

A view of the mosque from the outside

The Citadel is located within Historic Cairo, recognized as one of the world’s oldest Islamic cities. In this UNESCO designated World Heritage Site, you will find historic sites and museums, such as the Mosque of Ibn Tulun (where you can go up to the top of the minaret for a panoramic view of Cairo), Al-Muizz li-Din Allah al-Fatimi Street (one of the oldest streets of Cairo that runs between the old city gates), and the famous Khan el-Khalili Bazaar.

While not a definitive list for visiting Cairo, the above information is based on my own experience in and research of this evolving city that both confounds and captivates. Egypt is one grand open-air museum that requires time and patience to appreciate. Time, because there is a lot to see; and patience, because being a tourist in Egypt is sometimes exasperating. While touring Egypt, and more specifically Cairo, is beyond rewarding, it is important to acknowledge the impact that tourism has on the economy and people. Many Egyptians depend on the income earned from a very competitive tourism industry and as such, it’s not surprising that business from tourists is highly sought after in an array of manners. Knowing that any frustrations experienced aren’t unique to you is reassuring, and in becoming more aware of the cultural and political setting, you can adjust your mindset and take in everything this vibrant city and the surrounding area have to offer.

For What to Know & What to See on the Nile River and in the Museum of Egyptian Antiquities, check out my other posts with helpful tips.  For the full details of our time in Cairo and our experience on the Nile River, I’ve posted longer recaps.

Where is “a place where adults can be adults”? That would be at Charles E. Fromage, my next Small Business Spotlight!
If at any point during the past year you’ve stared at an empty wall above your work-from-home desk longing for inspiration, or, during a closet clean out, came across photos or artwork that you never got around to framing, this Small Business Spotlight is for you!
Milwaukee winter walks - cold hands & sherbet skies
Cant stop won’t stop eating the delicious, gourmet popcorn from Goody Gourmets, my latest Small Business Spotlight feature!
I’m back with another small business to spotlight on the blog, this time featuring Triciclo Perú!
Since moving back to Milwaukee, I’ve been looking for ways to reacquaint myself with the city while supporting the community. I figured one good way to do this is by getting to know the small businesses around town!