We kicked off the first leg of our Euro road-trip thru Germany this week and thanks to Dan’s driving and his comfortable Volvo, it’s been smooth and fast sailing on the autobahn. This first half of our trip took us thru the largest of the cities on our route- Dusseldorf, Cologne, and Frankfurt. Each of these places was new to us and we were pleasantly surprised to find a mixture of charm and modernity across the three.
We headed over to Dusseldorf on Friday after work, which was an easy two-hour drive almost directly east for us, but we didn’t arrive at our Airbnb until after 8pm, which is not a problem when the sun sets after 10:30pm here. I feel it’s worth mentioning that it is very common that Belgians take off work in August for holidays. We had no issue embracing this norm as we’ve both been looking forward to a summer road trip where you don’t need to go too far to get a change in scenery or country.

Upon our arrival in Dusseldorf, our Airbnb host Olga was so welcoming and even offered some tips on how we could sleep comfortably in her apartment, which like most here, is without AC… advice that was appreciated since it’s been in the 80’s+ almost every day the past few weeks. The consistency of these high temps for an extended period of time is unusual for northern/ central Europe so we’re learning to adjust sans AC… this includes bringing our own oscillating fan with us on this trip. No baggage limits when taking the car! We ended up eating a late dinner in Altstadt (Old Town) after spending a little too much time driving around the neighborhood looking for parking. Dan had his first taste of pork schnitzel and was immediately enamored. Actually we both enjoyed our dinner which we followed up with a great view of the lunar eclipse and drinks on the Reihnuferpromenade along the Rheine River. With temperatures still in the 80’s late in the evening, it actually felt more like we were having cocktails in the Caribbean rather than on the “Unromantic Rheine” (Rick Steve’s words). On our walk back to the Airbnb later that night, we were impressed with the atmosphere along the river and both commented that it reminded us of Summerfest in Milwaukee- lots of people listening to music and drinking along a body of water late into the night. 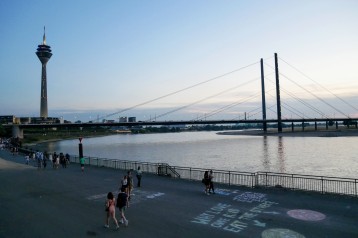 Two different views of the Rheine River from Reihnuferpromenade 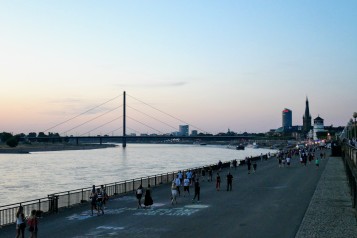 Two different views of the Rheine River from Reihnuferpromenade

Our morning in Dusseldorf started off with breakfast at a café and a welcome walk along the river to the MedienHafen, an area in the harbor known for its refurbished warehouses and newly constructed modern buildings that house around 700 companies. Again, we were reminded of Milwaukee and its 3rd Ward (are you seeing a trend here??) with its fun mix of warehouses and newer apartment and condo complexes. We were on our way out of Dusseldorf mid-day and on to Cologne- it was a quick trip to Dusseldorf but we both agreed that we’d love to come back in the winter during Christmas-time.

Of the three largest cities we visited in Germany, Dan and I both agreed that Cologne was our favorite. We stayed at a hotel near what many would consider to be the main attraction- the Cathedral. Even after seeing so many cathedrals across Europe, I have to say that this one impressed me. It was the most obvious of landmarks as we were driving into the city from the north, as it towers above the rest of Old Town. We learned that it was hit by bombs 15 times during WWII, and while the rest of the city was demolished, the cathedral absorbed the hits and remained relatively undamaged. I’m so glad we bought the tickets to walk (hike) the spiral staircases to get to the top of the spire. It was a hot and smelly climb up the cramped tower but the 360 degree views of Cologne were worth it!

Cologne cathedral from the street

At the top after a sweaty climb

We were in desperate need of a refreshment after our sweaty spiral staircase climb, so we headed over to Old Town which we had been informed was an ideal place to locate Kolsch beer- the Pilsner of choice in Cologne. Seated at the table, we tried to read what we thought was a beer menu (in German) but when the waiter came over, he informed us that we were in fact looking at the food menu not the drink menu. We asked him what beer he recommended and he was kind enough not to roll his eyes, but instead responded graciously to our question with what we already knew… we needed to try the Kolsch, it’s what’s brewed and drank in Cologne. We timed our stop perfectly as an afternoon shower arrived out of nowhere, much to the excitement of most people who were looking for relief from the heat, so we took it as a sign that we should relax and wait it out with our Kolsch. That afternoon, we timed our touring well such that each time the rain started, we were sitting down comfortably under an umbrella- it was a good excuse for our Kolsch house hopping!

We continued our walking tour by heading over the Rheine River by way of the Hohenzollern bridge which is known for being a love-lock bridge and the most heavily used railway bridge in Germany. It was covered in colorful locks, but even better, it offered a pretty cool view of the city from the other ride of the Rheine.

Love locks fill every inch of the bridge

Cologne from across the river

We enjoyed another delicious dinner in Cologne, this time Dan tried the veal schnitzel, but decided his preference was the pork schnitzel he had the night before. Fun fact: authentic schnitzel would most commonly be made with veal, but pork is also very common and respected. I actually tried turkey schnitzel on this trip and must say that was pretty delicious too! These variations all make sense considering schnitzel really just means meat that is pounded thin and then fried, so you really can’t go wrong with that. All this beer and fried meat required a scenic city run the next morning, which took us along the river thru newer developments in the city. Again, very cool to see the mix of modern with the historic. Another thing worth noting that we found interesting about the city was the number of bachelor and bachelorette parties walking around during the afternoon and evening- are German bachelor and bachelorette parties in the works for us? Probably not… but we’re open to suggestions!

Before heading out of Cologne, we made a point of visiting the National Socialism Documentation Center which was a short walk from the hustle and bustle around the cathedral. This museum is actually an old Nazi prison preserved in its original state that provides a glimpse into the horrors experienced by those imprisoned and tortured by the secret police from the 1930s-40s. There are more than 1,800 wall inscriptions in the cellar prison cells that have been perfectly preserved and translated on separate panels that allow visitors to try to comprehend what those who were imprisoned here experienced. There is also a museum on the upper levels of the building which gives context to the build-up to WWII (recommend the audio guide here as most of this area of the museum is in German). We both thought the museum or perhaps more accurately described as a memorial was really well done and moving- an important acknowledgement by the city of Cologne to a truly terrible time in history.

Our third city of the trip was Frankfurt, which like Cologne had an impressive skyline, but this time it was filled with numerous skyscrapers instead of a cathedral. Outside of London, I have not seen this many skyscrapers in a European city, which made it feel more akin to an American city like Minneapolis (in my opinion) or Charlotte (in Dan’s opinion). If the rest of our trip was to be spent in smaller quainter towns, Frankfurt, the financial hub of continental Europe, was the exact opposite. Frankfurt am Main (on the Main River) was severely bombed during WWII and after the war was part of the American Zone of Occupation of Germany, perhaps explaining why the architecture reminded us of an American city.

That’s not to say Frankfurt wasn’t a cool city to see for the day, just that it felt more international and business oriented than most other places we’ve visited in Europe where we’ve enjoyed seeing historical sites that have been around for some time. It was another hot day in the city, so we found a beer garden along the river, noting the prevalence of English in the conversations of those around us. On that note, it’s worth mentioning that our English has gotten us around just fine over here. I can count on one hand the number of times we’ve said something in English and gotten a funny look. Most of the time, people have just addressed us in English from the start… that’s helpful considering we’ve only mastered “thank you” in German. Some other notable take-aways thus far are that the Germans are a very friendly bunch who aren’t shy about greeting you with “guten morgen” (good morning). We also learned that unlike Belgium, it’s common to tip at restaurants (5-10%), but don’t spend all your change on tips, because like everywhere else in Europe, you’ll need it to pay for the bathrooms, including those on the autobahn. 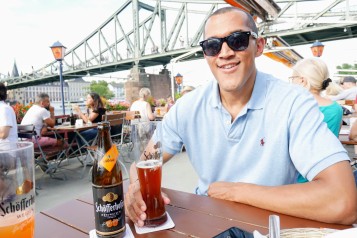 We deemed our one night in Frankfurt to be enough for us to see the city and enjoy dinner which of course meant more schnitzel for Dan but this time with the green “frankfurter” sauce. We’re (or maybe just me) really looking forward to the next leg of our trip which will take us farther south-west. I am officially dubbing this road trip the Germany River Tour because we’ll be staying along our third river- the Moselle, which is known for its slow-paced small towns and white wine.

More to come on the Moselle River in the next blog.