Tis the Season for Christmas Markets

It seems like at this time of year, you can’t travel anywhere in Europe without encountering a Christmas Market. What’s more, colleagues and clients alike are curious to know which markets you’ve been to and where you are still planning to go. Most people have their favorites, and we’ve been happy to have the recommendations! That being said, it’s only December 11th and I think it’s safe to say we’ve had our fair share for the season. Our plan for the month of December was to make it to two to three, but I have a feeling that before Christmas arrives, we will have seen at least five markets!

Our first market was in Bruges, Belgium, which is a short hour or so train ride from Brussels Midi Station. It was our first time experiencing a true European Christmas market with the hot wine, small trinket shops, loaves of pound bread, and chocolate a plenty. We kicked things off the last weekend in November and were looking forward to getting in the Christmas spirit, despite the lack of fluffy, white stuff that’s usually sticking to the Wisconsin lawns by now. Instead, we were greeted with typical Belgian rain and dreary skies, which, fortunately, can be overcome quickly when surrounded by Christmas lights and holiday songs and cheer.

It didn’t take us long to find the hot, spiced wine, red this time, which was served to us in Styrofoam cups from large heated vats by the friendly folks in the huts/ chalets. The best part- you can casually stroll the city enjoying the festive lights while sipping on said beverage. The Christmas Markets are set up in the city parks and squares where visitors shop for food and souvenirs at the little chalets, while sipping on your choice of hot or cold brew. Usually there are multiple markets set up around the city so you can easily stop for a drink or bite to eat at one before making your way to the next. We’ve seen small ice rinks and activity areas set up for kids as well, so I suppose this makes quite the ideal family outing. We capped the night off in Bruges with dinner at Réliva- excellent food and service. Our waiter was very helpful in recommending drink pairings for our main course, encouraging Dan to try a local Bruges beer and me to pair a red Spanish wine with my duck.

The weekend following our visit to Bruges, we drove the 4.5 hours to Strasbourg, France for one of Europe’s oldest Christmas Markets, also consistently ranked as one of the best by those persons who are experts in this area. Even without the market, Strasbourg would feel like a quintessential European holiday village. The innermost part of the city is an island, Grande Île, surrounded on all sides by the river Ill and along the cobblestone streets are many preserved timber-framed homes.

The timber framed homes of Strasbourg

The timber framed homes of Strasbourg

Dan and Kaitlan being welcomed to “The Capital of Christmas” 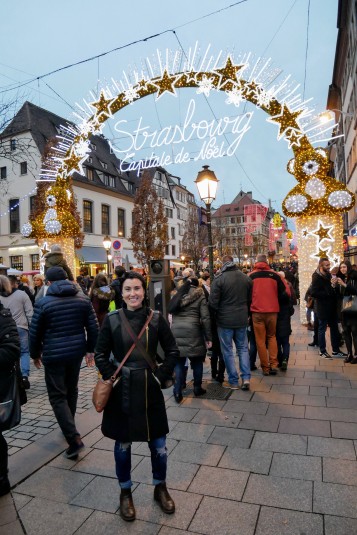 Dan and Kaitlan being welcomed to “The Capital of Christmas”

Given the longer drive, we had previously decided to stay overnight in the city, but as we didn’t end up booking until last minute, paid quite a bit more than we usually do for an Airbnb that I will say was conveniently located in the center of the city. Our host was friendly and full of tips for tackling the four or five themed markets spread out across the city, offering advice on which spots are the most touristy, where the locals like to go, and how to see the large and very real Christmas tree. Everything in the innermost part of the city is reachable via a short walk, so we, along with the thousands of others in the city, descended upon Strasbourg looking forward to the hot wine, white and fruity this time, and other goodies in abundance.

They actually close the center of the city to cars during the market and have security checks set up on the bridges into the inner city, so it becomes a secure pedestrian-only zone. Without knowing this was the case, we got lucky and decided to grab a street spot to park the car just outside the center and then walk the 15 minutes to the Airbnb from there. This was probably our best decision of the trip, seeing as neither of us could have imagined just how busy this market would be. I suppose if you can claim to be the one of the best Christmas Markets, you are going to draw a crowd, but we still aren’t sure how the city accommodates that many people for a month straight- they must run out of the hot wine at some point! Actually, I would really like to know how much wine this market goes through during the month of December as you don’t see many people without a cup in hand. In Strasbourg, you pay a deposit for a festive plastic cup that you can take with you and have filled up at any spot serving the wine. When you’ve had your fill, you return it and receive your deposit back- very eco-friendly!

After a (very) late lunch, we set out in search of the large tree and more wine, all while weaving through other revelers who crowded around the chalets selling toys, stockings, cookies, cheese, pretzels, and candy- you name it, they sold it here! Walking along the river provided us with a brief escape from the hustle and bustle, but as we were navigating closer to the tree, it was clear that this was pinnacle of the market. The Strasbourg Christmas tree, that in the current year stands at nearly 100 ft. tall in the center of Place Kléber, is a real tree that has been covered from trunk to star in lights and ornaments- the work of Santa’s elves I suppose given I can think of no other explanation as to how they pull this feat off.

Cheers to excellent decorating of this mammoth

After some hours of wondering between markets, we preferred to sit down for our dinner meal, but realized pretty quickly that, like in Brussels, it’s best to make a dinner reservation in advance… especially when it’s you and thousands of other people competing for a table in the tiniest of restaurants. We actually walked into a restaurant with great reviews, only to realize that the small, one room dining area was completely full of others who must have read those same reviews. We opened the door directly into the warm and cramped dining area and every head in the restaurant turned to look at us and stare at the crazy foreigners who apparently don’t yet comprehend the necessity of dinner reservations. In those circumstances, it’s best to just leave and not even bother trying to seek out the host or hostess on the other side of the room as you won’t be dining at their fine establishment on that evening.

After a couple more failed attempts, we found a winner and settled into an Italian restaurant in the heart of French Strasbourg. In restaurants, we can only play along and pretend we know French for so long and our waiter picked up on this, but was more than happy to assist us in understanding the menu. When I ordered the cod, he kindly explained that this was not a cod filet, but rather cod mashed with potatoes. I asked him if he recommended it, and he responded yes, absolutely, as long as I am not expecting a filet. He was right, my “cod mash” (my words, not the real name) was delicious and Dan’s truffle pizza was fantastic, so we left satisfied and appreciative to have found a tasty meal amidst the Christmas chaos. While we enjoyed the food, wine, and festive atmosphere of Strasbourg (it’s France so you can’t go wrong there), we did find the town a bit crowded for our liking and figured we probably had our fill of markets for awhile.

Strasbourg sure looks good this time of year

Strasbourg sure looks good this time of year

After a “petit déjeuner” at a café in Strasbourg the next morning, we started our drive back to Brussels. To break up the drive and act on our intentions of exploring different areas of Belgium, I identified an abbey that produces its own cheese, as a place to stop for lunch. We were of the impression that they also produce beer there, but apparently, this abbey no longer has a brewery, unlike like those responsible for the famed Trappist beers. The Maredsous abbey beers are now brewed, under license, by Duvel, using the original recipe that has been well-preserved and passed down- it’s supposedly stored in the abbey library. Dan, the up-and-coming beer connoisseur, is a big fan of Maredsous and I do agree, it’s a delicious beer.

Only slightly out of the way for us, Maredsous Abbey looked like it would offer us a quiet moment away from the Christmas hustle and bustle to enjoy a delicious lunch and some locally made cheese. We were enjoying the scenic drive through Wallonia into the town of Denée, but when we turned onto the road leading to the abbey, were greeted by a long line of cars. Lots of people and holiday lights… could it really be another Christmas Market? It was. While not the tranquil atmosphere we were looking for, it still ended up being a worthwhile stop to wrap up our festive weekend.

So with some markets behind us, our own (fake) tree up, and the Christmas music playing, I’m feeling quite “Christmas spirited”.   My colleague even shared a Speculaas cookie recipe with me today so I should be checking Christmas cookie baking off the list shortly! Wish me luck with the oven.