The Tour and Toasts in Belgium

Back in Belgium after our Scandinavian escapades, we were looking forward to spectating the Tour de France, which, for only the second time in the history of the race, was starting in Brussels. The route changes every year, but the occasion for the Grand Départ being held in Brussels was to celebrate the 50th anniversary of the first Tour victory of Eddy Merckx in 1969. Merckx is a five-time Tour winner and, in the opinion of cycling aficionados more qualified than me to make this assessment, the undisputed greatest of all-time pro cyclist. He is also Belgian.

The start of the 3,480 km (2,162 miles)-long 2019 Tour was held in Brussels over two consecutive days, meaning that we would have sufficient opportunities to view the race. Admittedly, not knowing that much about the Tour, but also very excited to witness it in person, I did my homework seeking tips and tricks for spectators. Realizing that the Grand Départ from city center on Day 1 would draw a lot of the crowds, I was thrilled when I looked at the Day 2 course and saw that the riders would be headed through our neighborhood, specifically our favorite park, Bois de la Cambre. Even better, Sunday would be team time trials, which along with mountain stages, are one of the easiest sections to spectate. Team time trials mean that instead of the entire peloton streaming past you in the blink of an eye, each team is racing separately against the clock so you are able to watch the teams go by over an extended period of two hours. Much easier for us newbies to get into!

I also learned that the publicity caravan (aka swag parade, aka tour “hype man”) is a pre-race tradition beloved by the spectators who have an opportunity to line the course and snag gear thrown from the procession of floats and cars that drive the route ahead of the cyclists. Knowing all this, we planned accordingly and recruited our ex-pat crew to come out for a pre-race picnic in the park and spectating of the time trials.

With the first team set to depart at 2:30pm from Brussels city center, we planned to arrive at the park by 1pm in order to claim a spot and enjoy lunch before spectating. Another strategic decision was picking the park as our vantage point seeing as there is ample space for spectators to spread out and crowding at the fence would (hopefully) be kept to a minimum. It wasn’t long before the swag parade came by and despite my jumping and arm waving, I suffered a few failed attempts to snag swag before finally catching biscuits, Bic pens, and other assorted cheap freebies. While I had my eye on the coveted red dot hats, my hilarious attempt to draw the attention of the stingy promo people on the floats was unsuccessful. I did luck out when a guy next to me ended up with a shirt that was too small for him – SCORE! Nonetheless, watching from a safer distance while the many parade-like floats went by and observing the spectator’s ruthless attempts to catch tacky freebies was very amusing. My personal favorite floats were the “folks of a retired age” enjoying their bikes, and the Vittel bottled water float misting everyone from a hose. 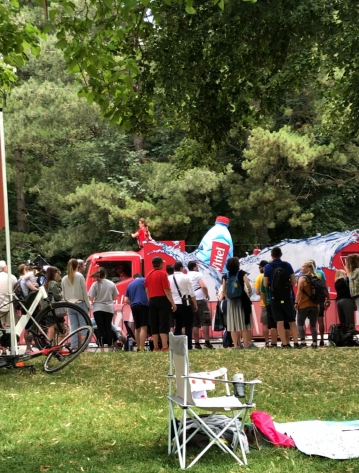 My two favorite floats of the caravan

A favorite float of the Tour de France caravan that paraded through the Bois de la Cambre in 2019.

Not long after the caravan had passed, the team time trials began and again we jostled for a good view as each team flew by. It was easy to tell when the next team was approaching as the crowd just behind us would start to applaud and cheer indicting you had about five to ten seconds to either prepare for a picture of the pack or refrain from blinking while listening for the familiar whoosh of cyclists speeding by at over 30 mph. Even though I had done my homework and was familiar with the very successful Team Ineos (formerly Team Sky) and a couple of the top contenders like Romain Bardet, Adam Yates and Jakob Fuglsang, it was not easy to tell who was who beneath the riders’ helmets and sunglasses. It’s thrilling to witness such speed and focus up close, but spectators be warned not to stick your neck out too far on the course!

What is it that makes the Tour so widely popular and treasured in the hearts’ of Europeans and the gradually embracing citizens outside of Europe? As the world’s largest annual spectator event with millions of people lining the route, it costs nothing to cheer on the peloton as it blazes past you – even better if the race is trekking through your town. Oh, and in case you didn’t hear, Egan Bernal, a 22 year old Columbian rider of Team Ineos won the overall race this year, making him the first Colombian or South American rider to win the Tour de France!

Another popular July activity is the Gentse Feesten, one of the largest folk festivals in Europe, that takes place over the course of two weekends in the city of Ghent each year. The event is a feast, festival, and cultural event that has been ongoing since 1843. Our ex-pat posse planned another outing and after a 30-minute train from Brussels, we were headed to the city center to drink Belgian beers and see this renowned festival for ourselves.

One stage of Gentse Feesten (Ghent Fest) just off the canal

Group pic at the Gravensteen

As there were a couple of visitors in the group, we did an impromptu walking tour of Ghent that included a sample of the infamous cuberdons, a peak at Graffitistrat, and a stop by the Gravensteen. If I’m being honest though, this visit was mostly about the beverages. In addition to the usual brew suspects, we dabbled in local liquor by toasting with a shot of Jenever at ‘t Dreupelkot. Not knowing much about Jenever, I actually had to do some subsequent research to appreciate the Belgians’ affinity for this historical spirit. Jenever, having originated in the region of Netherlands, Belgium and adjoining areas in northern France and northwestern Germany, is apparently the predecessor of gin. Nowadays, you’re only drinking Jenever if it’s made in these designated areas. I have to say that I did not like gin upon arriving in Belgium, but with the help of the friendly wait staff of our local eateries, I’ve grown fond of this spirit. With a huge list of Jenever flavors to try and a helpful bartender willing to translate them to English for us, I settled on ginger and was pleasantly surprised.

We finished the evening with a very satisfying pasta to go in a box, which, while I am not certain is so typically Belgian, was the perfect night cap before a couple of us caught the last train back to Brussels. Having witnessed an iconic race and partaken in a feast/ fest, I think it’s safe to say that we had a fantastic July in Brussels. With upcoming travel over the next few months, it felt right to live locally with friends for a few weeks.