What better way to kick off a week-long Scandinavian vacation than with a visit to our friend and home-office colleague, Matt, who is also working abroad for two years! Before our coast to coast drive through Norway, we flew to Sweden to experience the beautiful summer weather, long daylight hours, and stunning coastal scenery.

Stockholm’s Bromma airport (one of the four airports serving Stockholm) reminds me of a car rental store… but in a good way. It’s tiny; like eight gates and one baggage claim belt small. Under the watchful eye of a security guard or two, your family, friends or driver can camp out at the curb and peer through the windows to watch you await the arrival of your baggage. The small size and proximity to central Stockholm did make for a very handy and efficient departure a couple days later, so we are not complaining! Moreover, the bus from the airport to the Stockholm City Station was nothing short of convenient as well, so our arrival on Friday evening and departure on Saturday afternoon were very successful.

We stayed in the Klara neighborhood of Stockholm, which, while feeling more reserved, was in a great location for walking to the old town Gamla Stan as well as Ostermalm, where the Vasa Ship Museum is located. Our first destination in the city was in fact the historical city center of Gamla Stan where we wandered through quaint streets before stopping for dinner at Pastis. With a view of the replica of the St. George and the Dragon statue, commissioned in honor of the Swedes defeat of the Danish in the 1400s, we enjoyed French cuisine and wine while listening to the table behind us discuss Belgian beer. Sounds like a night in the integrated Europe Union to me! Afterwards, we passed through the oldest square in Stockholm – Stortorget, which is also the site of the Nobel Museum. To end the evening, we ate ice cream on the street while watching the US women’s national soccer team defeat France on a TV inside a neighborhood bar. 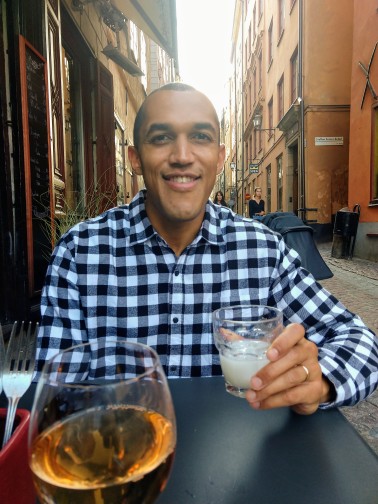 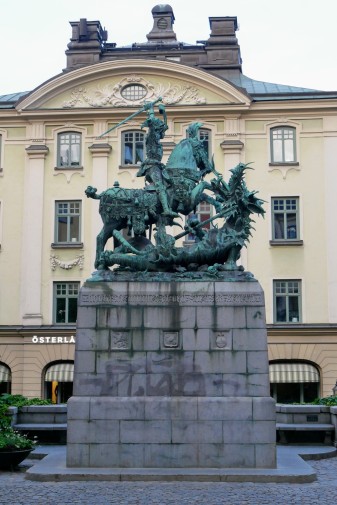 The statue of St. George in Gamla Stan

On Saturday morning, we located a running route from central Stockholm along the bay of Riddarfjärden through the park Rålambshovsparken to a swimming beach known as Smedsuddsbadet (bonus points if you can pronounce those correctly). We also checked the box on what has become an amusing tradition – capture a jumping picture while on a run in a new city. Our route along the water offered plenty of opportunities for great views and I strategically selected a bench as my launch pad for optimal aeronautics. 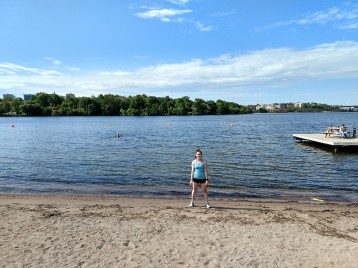 The Smedsuddsbadet swimming beach would be ideal for tri training 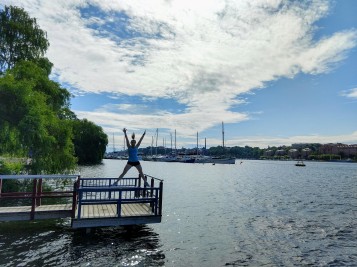 Kaitlan’s jumping pic while on our run

Hungry and ready for more exploration, we partook in the scenic 30-minute walk to the Vasa Museum so we could enjoy a lunch of Swedish meatballs with sides of mashed potatoes, pickled cucumbers, and lingonberries from its popular cafeteria. After lunch, we took some time to explore the museum, which is named as such for its housing of the warship, Vasa, that sank just outside Stockholm on her maiden voyage in 1628. Visitors can view the outside of Vasa from multiple levels and also inspect the contents of the ship at the time of its sinking, including the skeletons of its crewmembers. The ship was salvaged in the 1960’s and thanks to preservation works, 98% is original. Apparently it was also the heavily polluted water of Stockholm’s ström that facilitated the survival of the ship intact as the microoganisms that would typically break down wood were not capable of living in the contaminated water. 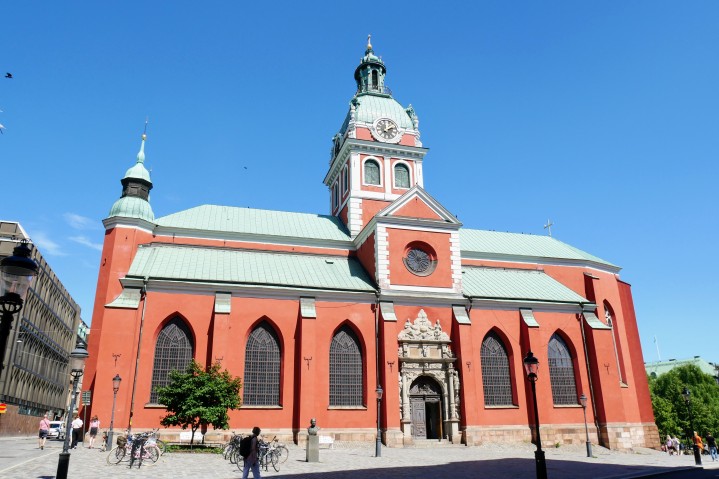 Passing by St. Jacobs Kyrka on our walk to the Vasa Museum through Östermalm 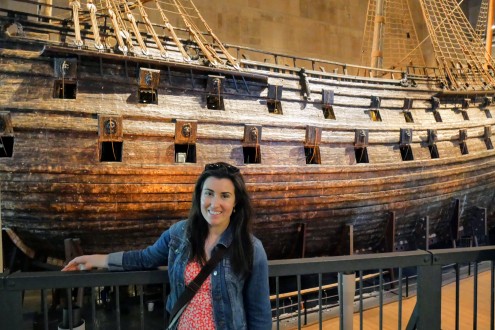 The resurrected Vasa ship stands tall inside the museum 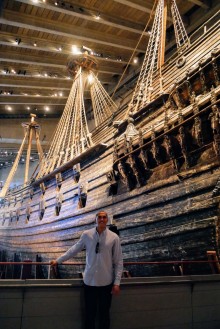 The resurrected Vasa ship stands tall inside the museum

Our time in Stockholm was limited, and before we could partake in another serving of meatballs, we were making our way back to the airport for our flight to Göteborg, located on the southwest coast of Sweden. We were looking forward to our visit to Göteborg seeing as Matt had already provided us with an itinerary for the weekend ahead, complete with city and coastal exploration. An hour on our propeller plane passed and we arrived at a larger airport with no less convenient transportation to the city. I was immediately impressed by Göteborg as our bus ride took us down wide boulevards flanked by tree-filled parks and outdoor cafes where the locals were cheering on team Sweden in the World Cup. Matt met us at the bus stop and after a quick stop at the Airbnb, we were on our way to dinner at Made in China in the Haga neighborhood. The Asian Fusion inspired tapas were delicious and we capped the evening off with local beers at Brewers Bar before calling it a night.

I started my Sunday morning with a run in the beautiful park of Slottsskogen before meeting Dan at Café Husaren for breakfast, but more specifically, the famed Hagabullen. Quoting Matt, Hagabullen can be loosely translated to a “sorta cinnamon bun the size of your head”. That description turned out to be pretty accurate, and while it was delicious, I wouldn’t have minded a little drizzle of warm frosting over the top. Nonetheless, along with my quiche and coffee, that was a phenomenally tasty start to the day.

From Haga, we walked to Kungsportsplatsen to meet Matt for the Göteborg canal tour. Göteborg’s canals are courtesy of Dutch planners and engineers who were contracted to construct the city, and then remained in political power until the mid- 17th century. The tour guide’s stash of corny jokes was impressive and she did a great job of sharing the history of the city while pointing out historical markers, and occasionally ducking under low-lying bridges. 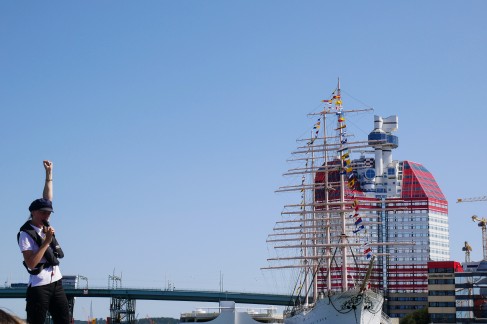 Photos from the canal tour- Skanskaskrapan aka the Lip Stick

Photos from the canal tour- Feskekörka, or Fiskhallen, an indoor fish market resembling a church (insert “In cod we trust” joke by the guide) 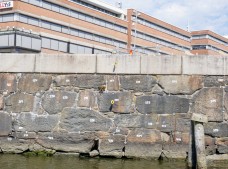 Of particular interest to me were the brightly colored but sedentary shipyard cranes that tower over the port. Once a prominent industry in the city, shipbuilding experienced a crisis in the mid-1900s that resulted in the cessation of production of the three big shipbuilders. Our guide specifically noted that as everyone native to Göteborg has a familial connection to the former shipbuilding industry, the crisis ultimately resulted in the end of a critical source of income for the city and its inhabitants. Göteborg is clearly resilient though and today, you will find cruise ships and new infrastructure lining the port. As further evidence of Göteborg’s success, the city is developing the former sites of the old shipyards and industrial buildings into new districts that serve as a hub for the science and technology companies that have taken up residence of the city.

Hopping off the canal cruiser just under an hour later, we made time for a quick lunch before boarding the tram for a half-hour ride to Saltholmen. Thanks to Matt, we timed our arrival perfectly and could immediately board the ferry (either the 282 or 283 will do) to enjoy the ride through the archipelago to the coastal island of Brännö. 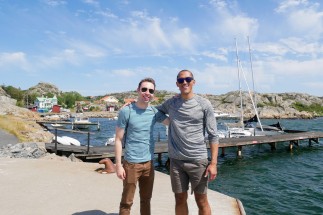 Kaitlan and Dan on Brännö 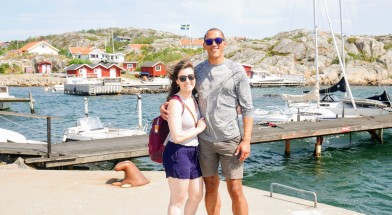 Matt and Dan on Brännö

Eager to claim their own rocks for sunbathing, the mainland Swedes departed the ferry hastily and took off a head of us on foot and by bike. There are no cars on the island, but you will need to hasten to the left to make way for the locals on their small motorbikes. We moved at a slightly slower pace as we made our way towards the public beach on the south side of the island, even stopping to admire an automated lawnmower. We must have looked very stereotypically American admiring the self-directed machine while pondering why these had not yet saturated the American market. 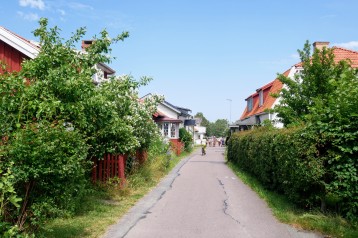 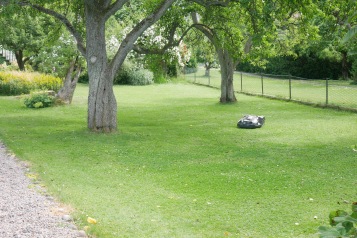 We reached the opposite end of the island in under 45 minutes at a leisurely pace and discovered the hideout of the swimmers and sunbathers. While a bit too windy and chilly to entice me to jump in, I nonetheless waded up to my ankles in the fringes of the North Sea while admiring those who plunged in and then resurfaced to dry out on the warm rocks lining the beach. 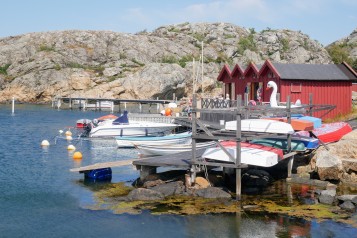 Figuring we could cover almost the entirety of the small island in a half-day, we followed more footpaths along the coast, eventually circling back to one of the few restaurants at the Brännö Inn, to make time for the traditional Swedish Fika. In short, fika is the afternoon coffee and cake break social embraced by the Swedes, but I think it’s best to ask a Swede what fika truly represents. In my own interpretation, it would be the intentional action of slowing down and appreciating life with those around you. It’s very representative of a friendly culture that doesn’t seem to take for granted their quality of living, especially during the seemingly endless summer days. Also easily adopted by visitors enjoying an afternoon treat of dammsugare and a sample of the local liquor. 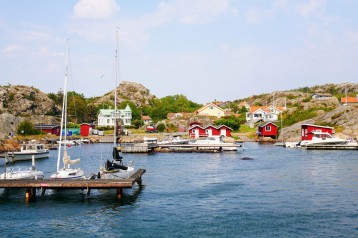 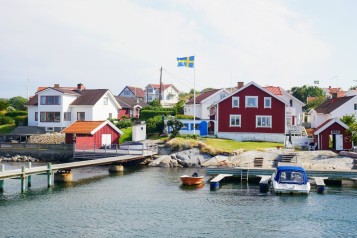 Worn out from a day filled with exploration, Dan and I ate a delicious fish dinner at Sjöbaren back in the Haga neighborhood while recapping our awesome weekend in Sweden. Having previously visited Stockholm, this time around in Sweden, I was incredibly impressed by the charming coastal Göteborg, made even better by a (temporary) local’s insights and hospitality. 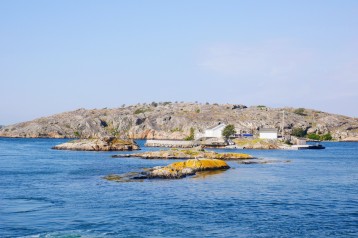 Thanks to our good seats on the ferry, we caught a glimpse of a sea lion on the way back to Saltholmen, but all we have to show for it is Kaitlan’s wind-blown hair 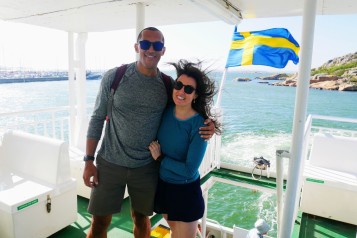 Thanks to our good seats on the ferry, we caught a glimpse of a sea lion on the way back to Saltholmen, but all we have to show for it is Kaitlan’s wind-blown hair

Our departure from Sweden was via an early morning three-hour bus ride to Oslo. Apparently, the rail tracks are undergoing works, but the alternative bus transportation provided was comfortable and afforded the first glimpses of the beautiful southeastern Norwegian coast. While sharing some topographical similarities to Sweden, we realized pretty quickly that Norway has its own vibe and culture that we were set to explore over the next 4.5 days.

Now if you made it all the way to the end of the post – this photo is your reward, which about sums up how we felt following our eight plus hour drive from Oslo to Bergen. More good stories on that haul, plus our Norwegian cross-country commute and sight-seeing, to come in the next post.